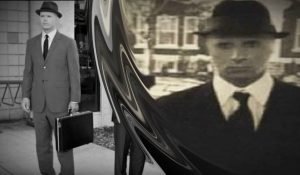 One of the most peculiar elements of the UFO phenomenon has been the recurring theme of “Men in Black”. Hundreds of reports of encounters with Men in Black (MIBs) have cropped up over the past four decades, not only in the USA but all around the world.

Although relatively little is known about their true identity, they always seem to emerge in the wake of a UFO sighting, usually to interrogate, intimidate or silence UFO witnesses and researchers.

MIBs are generally described as men dressed in black suits and shoes, with black trench coats and black Fedora-style hats, not unlike the ubiquitous mobster figures from the 1930s.

According to dozens of eyewitness accounts, it is believed that MIBs pose as government agents who attempt to harass or even threaten UFO witnesses in order to keep them from speaking out about any UFO activity they may have observed.

While many accounts of MIBs tend to identify these dark-suited characters as human, some have implied that MIBs might actually be extraterrestrial creatures posing as humans.

While the minor details of these accounts tend to vary, one highly consistent theme that can be found among virtually all eyewitness testimonies is that MIBs are hardly ever cordial or genial, but rather seem somewhat detached or even sinister in their demeanor.

One of the most famous examples of the Men in Black phenomenon is an encounter documented by Albert K. Bender, a World War II veteran, avid ufologist and founder of the International Flying Saucers Bureau (IFSB).

Bender created the IFSB in January of 1952 as a way to share his interest in UFO-related phenomena with like-minded people, and the organization grew by leaps and bounds from its onset.

By the summer of 1952, Bender and his fellow club officers were being inundated with reports of flying saucers and strange aerial sightings, many of which seemed to be happening in increasing number around Bender’s native town of Bridgeport, Connecticut.

Since Bender had been busy preparing to release the first issue “The Space Review”, the official newsletter of the IFSB, he began to wonder if the increasing frequency of UFO sightings in his hometown were some type of indication that he and his club were “under observation” by extraterrestrial visitors.

Bender became concerned that some of the revelations regarding UFOs that he had planned to share in “The Space Review” were making him a target of alien surveillance.

According to his own account, Bender had planned to reveal several discoveries he had made regarding the truth behind the UFO phenomenon (and subsequent cover-ups by the government) in the October 1953 issue of “The Space Review”, but before the newsletter was published, Bender received a visit from three mysterious men who were “dressed in black”.

Bender stated that the men had “already read” the report and even confirmed the validity of his findings, but they essentially threatened him to keep quiet, which caused him to back off from the project.

Bender was so frightened by “the silencers” (as he called them) that he ended up dissolving the IFSB altogether in October of 1953, less than 24 months after its inception.

Men in Black Show Up After the Solway Firth Spaceman Incident

MIBs also surfaced in the aftermath of one of the most famous paranormal events in UFO history: The 1964 Solway Firth Spaceman incident. While taking a picture of his 5-year-old daughter in Carlisle, England, amateur photographer Jim Templeton had inadvertently captured an image of what appeared to be some type of extraterrestrial figure in the background of the photo.

After the photo got picked up by the local newspaper, news of the phenomenon spread quickly around the world, prompting all kinds of conjectures regarding paranormal activity.

Interestingly enough, later that year Templeton claimed to have been visited on his job by “two large fellas over six foot high”, dressed in black, wearing “bowler hats”, and driving a black Jaguar.

They claimed to be agents from the UK’s Ministry of Defence, but only referred to themselves by number instead of by name. The two agents asked Templeton to accompany them to the place where the photo was taken.

Upon arriving at the Solway Marshes, Templeton led the mysterious men to the location of the photo, and one of the agents asked him to confirm that they were indeed at the place where Templeton saw “the alien”.

Put off by the agent’s odd choice of words, Templeton replied that he had seen no one else there the whole time he was with his daughter. The two men thanked Templeton for his time, and then promptly got in their car and drove off, leaving Templeton stranded at the marshes and forced to hitchhike his way back to work.

On the night of October 14th, 2008, the general manager of the Sheraton at the Falls Hotel in Niagara Falls, Ontario, along with a fellow employee working security, witnessed a large triangle-shaped UFO slowly flying over the hotel and then hovering over the Falls.

Both employees witnessed an intense white beam of light shine down onto the water and then point in their direction, frightening both of them. Roughly one week later, early in the morning the hotel manager again witnessed a similar looking UFO flying over the area, but this time at a higher altitude.

On May 15, 2009, a surveillance camera in the lobby of the Sheraton at the Falls Hotel captured video footage of two alleged MIBs entering the building. The men approached the hotel bellman, who described the mysterious duo as taller than usual and “extremely odd-looking”, and asked to speak to the hotel manager.

When the bellman informed the two men that the manager was not on duty that day, they appeared to be skeptical of the bellman’s statements, and began to walk around the hotel in search of the manager.

The two men then approached a female employee at the service desk, who later described the experience as horrifying. During a subsequent meeting with her boss, the young lady stated that the two men had asked her about the hotel manager, and that as they were talking, she noticed that each of the men had extremely pale skin, with no eyebrows and no eyelashes.

The young lady also mentioned that the men had large blue eyes, and that any time they made eye contact with her, their eyes almost seemed to have a hypnotic power. Recounting the event in tears, the young lady also remarked that one of the most disturbing things about her interaction with the two men was the fact that they “never blinked”.

Incidents such as this are just one more in a long line of accounts of encounters with MIBs that have extended as far back as the early 1950s. This phenomenon became so popular that in 1990, writer Lowell Cunningham created a comic book series devoted to the subject entitled “Men in Black”, which was eventually turned into a blockbuster film trilogy of the same name starring Will Smith and Tommy Lee Jones.

With the wide variety of accounts that have emerged regarding Men in Black, it is difficult to determine exactly who they are, or what their real purpose might be.

While some are convinced that MIBs are covert government agents who monitor UFO activity, others lean toward the theory that these strange characters are actually aliens living among us. While the whole truth may never fully be revealed, it will be interesting to keep an eye on how the phenomenon of Men in Black continues to evolve.