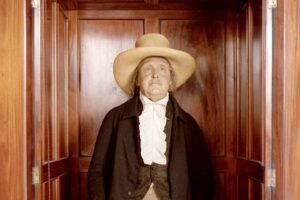 Philosophers tend to be eccentric people. Diogenes lived in a barrel. Socrates would walk up to unsuspecting people in the street and engage them in philosophical debate; any time, anywhere. Jeremy Bentham was no exception to this trend.

A British philosopher in the late 18th and early 19th centuries, Bentham was far ahead of his time. He argued for women’s rights, better treatment of homosexuals, and the rights of animals.

He is one of the founders of Utilitarianism, the philosophy whose basic tenet is to “do the most good for the most people.” Bentham was also the “spiritual founder” of the University College of London, meaning that while he did not play a direct role in its founding, his philosophies heavily influenced those who did.

These sorts of things seem par for the course of a great Enlightenment thinker. Jeremy Bentham’s will was where is eccentricity truly shined through.

Bentham’s will contained a stipulation that, upon his death which came in 1832 at the age of 84, his body was to be dissected and his head removed. Then the flesh was to be stripped from his bones.

The bones were to be dressed in his usual attire, which would be stuffed with straw to give the appearance of life. His head, meanwhile, was to be mummified and then set atop his preserved remains. 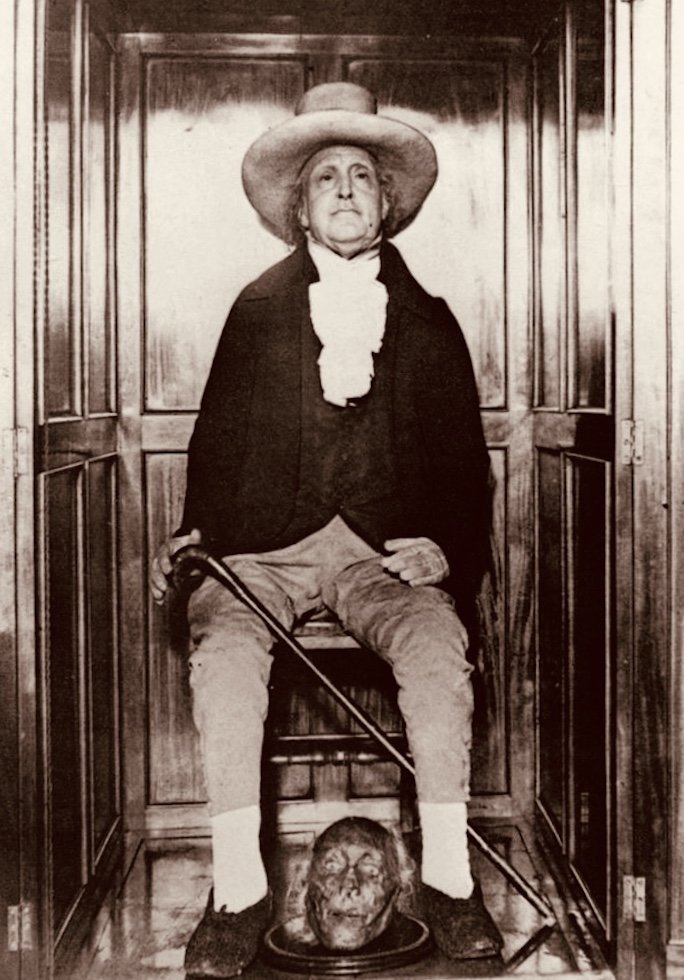 The entire mummy was then to be seated in a glass and wood case called an auto-icon (apparently people in olden times had a thing for displaying dead bodies.)

Originally, one of Bentham’s disciples, a man named Thomas Southwood Smith, owned the auto-icon. The University College of London acquired it in 1850. For the 100th and 150th anniversaries of the college, the auto-icon was brought out for the meeting of the College Council. Jeremy Bentham was listed as “present, but not voting.”

Bentham originally meant for his head to be part of the display. Thomas Southwood Smith employed an experimental preservation method. The head was placed under an air pump, over a container full of sulphuric acid.

He then used the pump to draw off the fluid. While technically successful, the effort resulted in the head looking distorted and ugly looking. So, a wax likeness was made and placed on top of Bentham’s skeleton. The preserved head was placed between the mummy’s feet.

The preserved head became a target for pranks by students of the college. Once, so the legend goes, it was stolen and held for ransom, the proceeds of the heist going to charity. Another legend has the head showing up in a train station locker, and another has it being utilized for football practice.

More likely, the head was taken off display due to ethical concerns over displaying human remains, and due to concerns about preservation. It’s now stored in the UCL Institute of Archeology, in a climate controlled store room.

As for why Bentham had his body preserved in such an odd manner, no one is quite certain. It might have been a sort of prank, a flouting of the traditional beliefs surrounding death.

It could have been due to an inflated sense of self importance. Or maybe it was a result of the age old impulse to preserve one’s legacy. No one knows for sure, but Jeremy Bentham and his Auto-Icon remain as a strange and macabre testament to a man and the philosophy he founded.

The Prophecies Of Baba Vanga