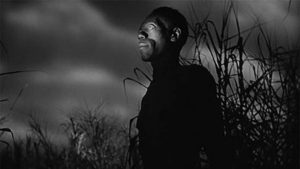 Zombies–the walking dead, reanimated corpses – are located deep at the bottom of Mori’s uncanny valley: though still human in form, they are no more connected with us by life, and they break our deepest taboos – cannibalism, grave desecration, the strict separation of life and death.

Zombies are have become familiar to most Americans by horror films of the last century. Almost all find zombies repulsive, but horror fans also find them exciting and even entertaining. The gore that accompanies any respectable zombie film still connects us to our fear of death in its most palpable form, rotting flesh; but with the fear comes the thrills, for those who can stomach it.

It may first seem that history has little link to our flesh-eating friends, but they have complex origins…The images on this page would be unsatisfying to most horror fans, as the hallmark of modern zombie films is now life-like, over-the-top gore. It will serve us better, though, to first explore the origins of this time-honored creature that began as an obscure Haitian folk myth but is now one of our most revisited horror archetypes.

It may first seem that history has little connection to our fictional flesh- eating friends, but they have complex origins, too little discussed and too often ignored by historians and horror fans alike: here we hope to provide the first step in the exploration of the phenomenon.

African scholars who deign to seriously discuss such topic as the zombie, say the word comes from the Kongo word for “soul”, nzambi.

When slaves were brought to Haiti and the Vodou religion grew amidst old African traditions and the harsh conditions of slavery, the idea of the zonbi was born.

Zombies are found on the fringes of the Vodou religion, not in the everyday praising of the gods.It is estimated that 80-90% of Haitians “serve the spirits” or practice Vodou. In Vodou, all people die in two ways–naturally (sickness, gods’ will) and unnaturally (murder, before their time); those who die unnaturally linger at their grave, unable to rejoin ancestors until the gods approve.

Souls are vulnerable at this time: their will may be snatched up by a powerful sorcerer (boko) and locked in a bottle which the boko uses to control their un-dead but un-living body. Other times he lets their body rest but uses just the soul. 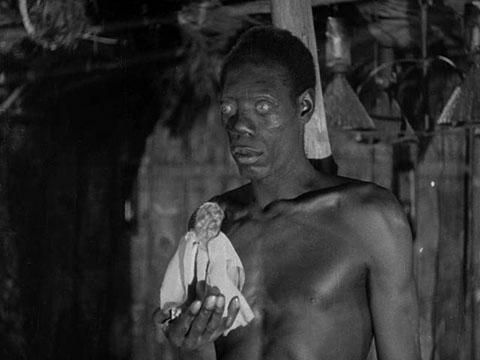 This is does not have to be unpleasant for the soul or body: under the right circumstances, a hardworking man might prefer to continue working rather than lie waiting in the ground, especially if he is used by the boko to help with healing magic. More unsavory boko, though, could purposely kill a man to make a zombie, then force him into mindless toil or worse, black magic & evil intentions.

Zombies and boko are found only on the fringes of the Vodou religion, belonging to the realm of secret societies, not the everyday praising of the gods (lwa). Do Haitians believe that the dead rise and become, at best helpers and at worst slaves? To some zombies are just folktales, to others they are as possible as a car crash, and to still others they are somewhere in between. Most see zombies as a metaphor for hard life without reward, a loss of control, or worse–a loss of faith.

The boko’s power to make zombies is used more often as a threat to maintain social order; only rarely will he actually go through with the act of catching a soul. The stories are told with laughter as much as with seriousness, and the zombie remains a potent image in the rural folktales and philosophical discussions of Haiti today.

Ever-sensitive to the stereotypes associated with Vodou, scholars rarely explore the still very present zonbi image in Haitian culture, and so we get little information from reliable sources (leaving horror films to replace facts). Those who do breach the topic are not treated seriously and are sometimes accused of racism; other scholars ignore their (to them) obviously unworthy research.

The most well-known researcher to explore the Haitian zonbi is Wade Davis, an ethnobotanist: the horror film The Serpent & the Rainbow is taken from his book of the same name. He sets out to prove the scientific reality of zonbi production, claiming to have found a zonbi-creating medicine and its antidote.

Despite these sensationalistic claims, the very well respected African art historian Robert Farris Thompson has defended Davis. In an introduction to Davis’ book Passage of Darkness, Thompson writes: “I would never have been steered in the right direction, taught to take the zombie phenomenon seriously as a social sanction of the greatest import, had I not come into contact with the research distilled in this volume by Wade Davis.