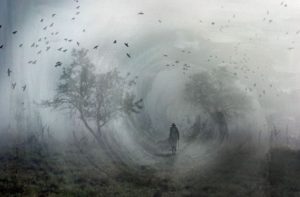 Some unexplained disappearances in history make one think if there is indeed another dimension that people are swept into and are never to be seen from again.

Many stories are true. There are people disappearing every day and they are never found or heard from again. They do not fall prey to foul play. They just disappear off the radar. What happens to these people? Is there a strange porthole that people enter into and cannot find their way back?

One strange disappearance from 1930 is when an entire Eskimo Village with a population of two thousand people disappeared. A trapper returned to the village to find pots simmering on the stoves, dog sleds gone and no one around anywhere.

The dogs and sleds were found s a short distance away buried in the snow. The dogs were dead. Graves of ancestors were opened up. This was impossible to do because the ground was frozen solid, but it happened. The bodies were gone. What happened to all the people?

James E. Tedford mysteriously vanished in November 1949. Tedford boarded a bus in St. Albans, VT, where he had been visiting family. He was taking the bus to Bennington, VT, where he lived in a retirement home.

Fourteen passengers saw Tedford on the bus, sleeping in his seat, after the last stop before Bennington. What doesn’t make sense is that when the bus arrived in Bennington, Tedford was nowhere to be seen. All his belongings were still on the luggage rack.

What is even stranger about this case is that Tedford’s wife also disappeared some years earlier. Tedford was a WWII veteran and when he returned from combat, he found his wife had vanished and their property had been abandoned. Did Tedford’s wife find a way to bring her husband into the next dimension with her? Stranger things have happened…

An eighteen-year-old student disappeared while on the trail in Glastonbury Mountain and then an eight-year-old boy disappeared from his parent’s farm. Neither was ever seen again. There were many disappearances in this area and the Indians believed that evil spirits lived in the wilderness of Glastonbury. However, there have not been any more disappearances since 1950.

Martha Wright disappeared in 1975 when she and her husband Jackson were driving from New Jersey to New York. When they were driving through the Lincoln Tunnel, the couple had to pull over because there was a lot of condensation on their car windows. Martha wiped off the back windshield while Jackson took the front. When Jackson had cleared the windshield, he looked up to find that his wife was gone.

There’s nowhere that a person could have run to in the middle of the Lincoln Tunnel, and it’s highly unlikely that someone in another car would have been able to pull over and snatch Wright without her husband noticing. It seems as though she just vanished from the spot where she was standing.

The strangest of disappearances is that of David Lang who disappeared in front of his children, wife, brother-in-law and a local attorney. He was walking through the field by his home in Summer County, Tennessee when he vanished into thin air.

A circle of brown still marks the place where he disappeared and no animals or insects go near the area. Nothing will grow in that area as well.

What causes these disappearances and where do the people go? Is there some supernatural gravity pull that can make a person vanish without a trace without anyone knowing what happened? Is there a porthole of some type that pulls people in when they least expect it? What other explanation could there be for these strange disappearances?

Some people will ignore these disappearances and call them legends, myths or even fictitious stories, but one has to wonder if they are not true then where do all the people go that disappear and are never seen or heard from again. Are you willing to believe that there is no such thing as another dimension? One can only wait to see what happens next in the world.