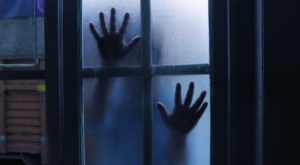 My parents were hard-pressed to get me over this “Mr. Tumble” idea. Now here’s the weird part… When asked to describe “Mr. Tumble”, instead of giving description as a child would of their imaginary friend, I’d say, “I’ve never really seen Mr. Tumble, he’s just there in the shadows. He’s real. He helped me down from the tree when I got stuck.”

When I got a bit older, and when again asked to give up the “Mr. Tumble nonsense”, I would throw a tantrum and insist that “Mr. Tumble is real, he was a soldier in the war and they used swords. He told me so.”

Things came to a heated argument one night between my parents, my mom wasn’t thrilled at all that her little girl wouldn’t go out and make friends like other children but would insist on playing at home with her imaginary friend and my dad thought it was okay, it’s a phase I will grow out of.

When suddenly, they heard a very loud banging on the wall from the direction of my room. Argument forgotten, they ran to my room. When they opened the door, they found me fast asleep in my bed, but in the corner at the foot of my bed, was a shadow of a man.

They quickly switched on the lights thinking that it was an intruder. The lights came on, but there was no one there, yet, at the foot of my bed was still this shadow. From what my dad described, the shadowy figure had clothes was nothing that he could recognize.

My parents started to panic when the shadow moved toward the sleeping me on the bed, it reached down and looked like it was stroking my head and then turned toward my parents and pointed at them… then vanished.

My parents were so shaken by this that they took me into their bedroom with them that night… and for many nights to come. But they never again doubted the existence of Mr. Tumble.

I continued to have Mr. Tumble as a friend until we moved… about six months or so after that incident.

I have absolutely no explanation for this.

Nor do I remember Mr.Tumble, my parents, gran aunt, and Grammy told me this was what happened when I was 3. Apparently, both Grammy and her sister, my Gran Aunt had seen and known of the existence of the shadowy person before my parents saw him for themselves.

Somehow, strangely, both my brother and I have had weird things like this happen to us frequently.