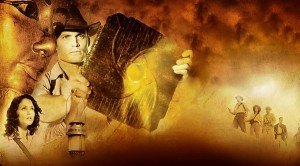 In the late nineteenth century a young English archaeologist by the name of Howard Carter was convinced that the remains of the ‘Boy King’, the pharaoh Tutenkhamun, lay undisturbed somewhere in Egypt. Carter first arrived in Egypt in 1891, and eventually secured funding for his archaeological digs from the wealthy Lord Carnarvon in 1917.

After 5 years of little success, Carnarvon gave Carter one last season of financial support. On 4th November 1922, Carter’s team discover a step cut into the rock floor of the Valley of the Kings. As they dug and removed the covering material, they discovered a set of steps that ended at a door inscribed with the name ‘Tutenkhamun’.

Carter ruled that they would do no more digging until Lord Carnarvon reached the site, and immediately sent a telegram back to Britain. Carnarvon travelled to Egypt and together he and Carter entered the tomb. They found a fake room, a storage room and then the burial chamber.

Unlike other pharaohs, Tutenkhamun had lain undisturbed since death, and when Carter had peered in by candlelight he discovered an untold array of treasures. The team catalogued and recorded all the items they found, the most impressive of which was the king’s sarcophagus – three interlocking coffins, the last of which depicted the earthly form of Tutenkhamun in beautiful gold metalwork.

Inside this lay the mummified body of the Boy King. Everyone celebrated at finding an unplundered tomb, and Carter’s team felt vindicated in their search. However, there were rumours that Carter had removed a sign above the tomb door that read ‘Death shall come on swift wings to him that toucheth the tomb of the Pharaoh’.

In the spring of 1923, Lord Carnarvon was bitten on the neck by a mosquito. He accidentally cut the bite whilst shaving, and the wound became infected. He started suffering fevers and chills and died shortly after in Cairo hospital. It is believed all the lights in the hospital went out when he passed away, and his favourite dog back in England is said to have howled and dropped dead the same instant.

The press had a field day, claiming it was the curse of the pharaoh – strangely, when the mummy was unwrapped, it had a bite on the cheek in exactly the same place as Carnarvon’s had been. Over the next couple of years, two of Carnarvon’s relatives, Carter’s personal secretary and several others connected with the discovery were said to have died in strange circumstances. Each time one died, the British media linked the death to the curse.

Some historians believe that the Ancient Egyptians placed poison inside the tombs to gain vengeance on grave robbers. Scientists have also advanced many theories in recent years that suggest food placed inside the tomb to help the dead body’s spiritual journey may actually have helped the breeding of microscopic spores which entered the explorer’s lungs when they opened the tomb.

This highly volatile fungus, which would have developed uninhibited over 3000 years, then caused terrible fever and fatigue in the bodies it infected. Certainly, Lord Carnarvon, who was not in the best of health, would already have been tired from the long journey out to Egypt and would therefore be more susceptible to infection.

But this theory does not totally explain the supposed curse, because very few of the people who were actually on hand died early. Of the 26 people present at the opening of the burial chamber, only six died in the following ten years. At the sarcophagus opening, 22 were present, of whom six died within a decade, while nobody who helped unwrap the mummified body suffered an early death. Carter himself, at the forefront of all the discoveries, died of natural causes at the age of 66.

However, Carnarvon was the one who funded the search, was and the first on site for the opening so it may be possible that Tutenkhamun focused his ire directly on him. It is certainly true that Cairo’s hospital’s lights failed at the time of his death, and the story about his dog has never been disproved.

One final fascinating rumour was that Carnarvon had given Carter a pet canary as a token of good luck to find the tomb. On the day of its discovery, it is said that a cobra – an animal symbolic of pharaohs – ate the bird. In fact, Carter had it kept alive and well, although it did pass into the possession what could be thought of as another kind of snake – he gave it to a bank manager!