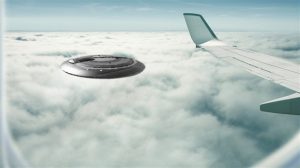 The first encounter in between a civilian aircraft and a UFO happened at 2.45am on 24th July 1948. Captain Clarence S. Chiles and Pilot John B. Whitted, both former US Air Force pilots, were flying an Eastern Airlines DC-3 flight from Atlanta, Georgia to Montgomery, Alabama.

The airplane was travelling at an altitude of 5,000 feet when both men seen a strange aerial vehicle approaching their aircraft. They said it appeared to be cigarshaped, 400 feet long, and travelling at around 600 miles an hour. They managed to make out two rows of windows along its side, which glowed bright white, and a blue light underneath.

It had no wings and its trail rocked the DC-3 as it blasted off. For the rest of the 1940s and 1950s many aeroplanes were ‘buzzed’ by UFOs, and the phenomenon grew to such an extent that military officials brought in a code that gagged US commercial pilots from talking about their experiences. On the other side of the border, in Canada, aircraft pilots did not have to follow such regulations.

In 1966 a Canadian Pacific DC-8 was flying at a height of 35,000 feet from Peru to Mexico City when the crew witnessed something very odd. The Captain, Roger Millbank, was so certain of what he and his staff had seen that he filed an official report with Mexican authorities.

He said that he and the co-pilot had seen two bright white lights to the left, which gradually separated and approached the DC-8. The lights seemed to change in colour and intensity, and they turned into two distinct beams, pointing in a V-shape. They came nearer still, and finally levelled off by the airliner’s left wing-tip.

Millbank said that in the light of the full moon they could ‘see a shape between the two lights, a structure which appeared to have been thicker in the middle’. It remained close to the DC-8 for a couple more minutes, and then disappeared behind. On one flight in the 1970s the passengers on a British Airways jet had a very lighthearted encounter with a UFO.

The plane was flying just south of the Portuguese capital, Lisbon, when the Captain heard air traffic control issuing a warning about a strange object in the skies near their flightpath. The crew of the BA flight saw a bright light in the distance, and a cigar-shaped craft soon appeared close-by. Realising this was too good an opportunity to miss, the British pilot issued an announcement over the passenger address system, ‘Ladies and gentlemen, if you look on the starboard side of the plane, you will see what we believe to be a UFO.’ The airliner reached its destination safely.

In November 1979, a rather more unpleasant episode befell the pilot flying a Spanish charter plane from Ibiza to the Spanish mainland. At an altitude of 24,000 feet a strange subject almost collided with the airliner. The pilot saw a bright red object, seemingly on a collision course with his vessel, and began an emergency dive to avoid it.

The UFO continued to buzz round the airliner, and in the end two fighter jets were sent to intercept the object. The whole incident was witnessed on radar screens and by countless people watching from the earth below. A similar occurrence happened in the same area exactly one year later. The pilot of an Iberian Airways jet flying at 31,000 feet suddenly saw an immense green bubble in his flight-path. The phenomenon was witnessed by six other commercial airlines in the vicinity, and some reports said it even swooped down on Barcelona Airport. In recent years, other similar incidents have occurred.

A British Airways 737 was arriving at Manchester Airport in 1995 when a UFO buzzed near to the side of the plane. An even closer event happened on12th June 1998 when an Oslo-bound jet took off from London’s Heathrow Airport. The plane’s captain reported to air traffic controllers that they had almost been hit by a small aircraft.

Later the co-pilot said he had seen a very clear bright light and the captain filed an official report claiming a fighter-sized aeroplane had passed within a 50 metre distance of the aircraft. Aviation, military and police authorities found no explanation for the incident, however they say that no matter how safe air travel is, accidents sometimes do happen. With this level of unexplained aerial activity,perhaps it’s surprising they do not occur more often.