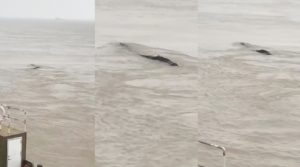 This video was filmed from the shore of Yangtze River in Yichang City, China.

An unnamed eyewitness filmed how something very large, black and with a long tail coiled in the water near the shore. The video was first uploaded to the Chinese video service Douyin.

According to the newspaper Daily Star, on the back of a snake-like body was seen like a hump ledge.

The video has spread and gained millions of views. Users have been speculating about what it is, but no one could draw any conclusions.

Local forestry representatives have not commented on the entry yet.