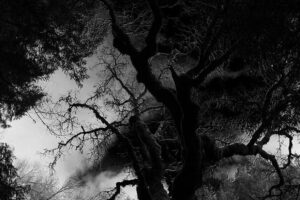 In the Mexican state of Michoacan, in the early part of the 20th century, there grew an immense tree on the Haciendita Ranch that was believed by locals to be cursed.

This tree which known to the locals as arbol maldito, or “cursed tree” was already 75 years old, and had been planted by a man who, according to local legend, had been swallowed up by the earth as divine punishment for his many sins.

It was a tree that played a role in numerous fatal accidents and was planted by a man who was allegedly in league with the devil.

The planter of the tree, it is said, never set foot inside of a church. Even worse, he refused to abide by the Mexican custom of having a picture or likeness of a saint inside his house. He never gave to charity, and never went out of his way to offer a kindness to anyone in need.

It was rumored that this evil man had been responsible for several murders around the Zamora district but, because of an unholy partnership with the devil, he always managed to avoid jail time.

It was said that by simply invoking the name of Satan he could render himself invisible. He could also, the legend states, shrink himself down to the size of an ant in order to avoid capture.

The reputation of the cursed tree was further cemented after a pedestrian had sat beneath it seeking shade on a hot, summer day. He was bitten by a snake and died two hours later. Three men, on different occasions, sought shelter under the tree during rainstorms and were struck and killed by lightning.

A woman who was hanging laundry to dry from the trunk of the tree was attacked and killed by a goat later on the same day. In 1903, a little boy who was riding a burro past the tree was suddenly thrown off by the animal and kicked to death.

The last recorded fatality linked to the cursed tree was the death of Melquiades Arevalo in the summer of 1905. During a sudden downpour of rain Arevalo sought shelter beneath the tree. Like three men before him, he was struck by lightning and killed.

Interestingly, there is another cursed tree in New Jersey. On Somerset Hill, at Oak Hammock Park, stands an ominous, ominous-looking old oak tree, its branches open to the sky, which from afar resembles a kind of scary scarecrow with its fine arms rocked by the wind. The locals call it “devil’s tree”.

And the name is not accidental, because the legend says that under his rough branches have been recorded numerous murders, satanic rituals and other facts of blood.

The earliest oral accounts of the region state that the tree was used by the Ku Klux Klan of the region to “execute” black or African-American people, hanging them from their branches.

Entering the twentieth century the blood facts did not remit, as it was also recorded the case of a farmer who lived nearby who hanged himself in the same tree after killing his two children.

Thus, the New Jersey tree carried on its branches with more dead human bodies than any other tree in the vicinity, not to mention that satanic rituals were supposedly held there and that the serial killer Gerard John Schaefer, a former policeman known as “the Blind Creek butcher “who committed multiple juvenile crimes in the early 1970s, allegedly raped, maimed, hanged and buried two girls there by the tree, returning days later to commit abominable acts of necrophilia with the corpses.

For this reason, there were few locals who claimed that the roots of this tree were not fed by water, but by blood. And that its bark and its branches absorbed the violence and the terror of all those ominous acts.

People who have had the courage to approach the tree have also delivered other baffling data. They say that a sense of oppression and restlessness seize them, as if in the environment one breathed the evil, and that the tree always stays warm to the touch, even if it is very cold and snowfalls, as if its wood were in fact throbbing flesh.

Paradoxically, the constant heat of the tree coexists with small cold areas in its bark, about 2 square meters, which remain so even in the hottest months (according to parapsychological knowledge, incidentally, inexplicable cold is something that usually accompanies to evil presences).

In addition, it is said that those who have hit the tree, mocked him or even urinated near his trunk, have consistently experienced traffic accidents or some other nefarious event.

So the question, the most logical question is: Why no one has felled the tree? It is said that on one occasion the local municipal authorities decreed that the tree be felled, but the workers in charge of doing the work could not complete their task.

First, the electric saws ceased to operate inexplicably when the workers approached the tree, and then, when they came back to work, the sawtooth teeth broke when they tried to penetrate that damned wood.

And when the same workers, doing it the old way, tried to bring down the tree with axes, the leaves of metal left the wooden handles after the first blows, reason why it finally gave up trying to cut it.

Since then he has been assured that the tree of the devil has imprinted the seal of doom and death and even protects himself, sending bad luck to those who dare put him in danger.

With respect to all these unexplained phenomena, some experts have asserted that this tree, like any living being, simply absorbed the malevolent energies that were emitted around it during the last centuries, especially in relation to lynchings, murders and suicides that were recorded around him.

The tree of the devil today stands on Somerset Hill in New Jersey as a dumb and silent witness to the macabre events that took place under its branches. And an iron ribbon is attached to its trunk, to indicate to the visitors and unsuspecting that they move as far as possible from him.