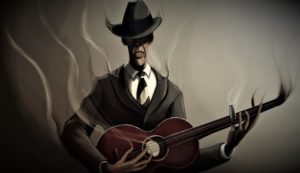 This is a legend about Robert Johnson, a poor blues guitar player, who went down the crossroads at midnight and made a deal with the devil to be the best blues player ever.

Deep in the Mississippi delta, in the heart of voodoo and occult practices, on a lonely dirt road, as darkness fell, Mr. Johnson found Hell and changed the sound of music forever.

The term crossroads literally describes the spot where the paths of two different roads intersect. Crossroads are associated with cultural superstitions and magical influences. All sorts of supernatural forces; including fairies, witches, trolls, ghosts, and demons allegedly manifest at the less traveled crossroads to conduct private activities.

Haunted crossroads have long been suspected for the strange disappearance of travelers. Ghostly riders, dark apparitions, and ominous creatures have all been seen at lonely crossroads just after sunset. Legends from the Deep South say that crossroads are places where deals with the Devil can be made, or where contests can be preformed to obtain the rights to a particular soul.

One old legend tells that the lost souls of suicide victims remain trapped at the crossroads until they are forgiven and set free. On the night of All Hallows Eve, Halloween October 31st, the souls of the dead will appear and can be conjured at the crossroads. Once the spirit of the crossroads has been called, it must answer three questions correctly.

The most famous crossroads legend comes from the Deep South delta town of Greenwood, Mississippi. By the early 1900’s slavery had been abolished for several decades, but life in the delta for the former slaves and their families was often just as oppressive as slave life.

The former slaves were free men and women, but most of them who had not moved north by the turn of the century still worked on southern plantations as sharecroppers. They worked the cotton fields from sunrise to sunset, enduring backbreaking labor in the sweltering heat with almost no money to show for it. 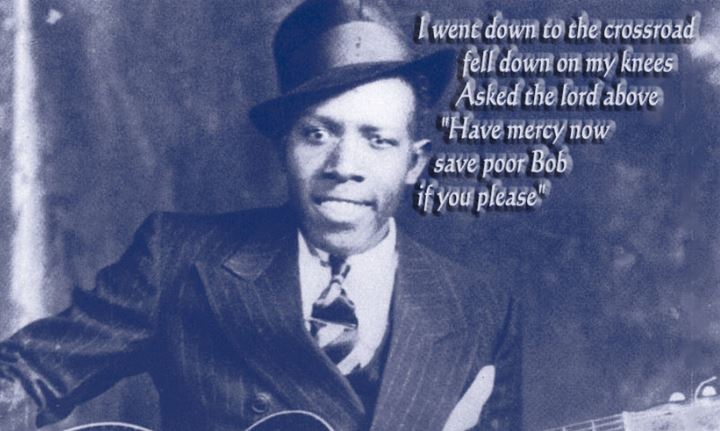 During this time these hard working people searched for ways to escape the cruel and agonizing existence of the delta. Church hymns, poetry, and work songs developed into a musical escape to pass the time. No one knew it at the time, but the Mississippi delta was about to give birth to a form of music that would revolutionize the world; rhythm and blues.

Local bars began to spring up on the outskirts of communities called, “juke joints.” Juke joints were places where field workers could go on the weekends to drink whiskey, socialize, and listen to the blues.

The juke joints were very popular and controversial. The local churches considered them to be houses of the devil, and believed that anyone who visited these places would eventually lose their soul to the devil.

Robert Johnson (1911-1938) was born into a sharecropping family in the south. His father committed suicide when Robert was very young and his mother remarried a man who physically abused the family. Robert ran away at age sixteen, and made his first trip to a juke joint where he fell in love with the blues music. Robert got an old guitar, and became a musician.

There was just one problem; Robert could not play the guitar very well. He tried learning for several years, but could not master even the most basic blues songs. He was so bad that the master blues players of the time would call Robert to come up on stage and play as a joke. He would play badly, and the audience would laugh and crack jokes.

Eventually, Robert fell in love and got married. He gave up the blues, and settled down to become something he always hated, a sharecropper. Robert’s wife became pregnant. He had settled into life as a farmer. He loved his wife, and was looking forward to having a child.

Robert had moved on, putting his guitar playing days behind him, but fate had other plans for Robert Johnson. Robert’s wife had trouble giving birth and both she and the baby died in labor. Robert was so destroyed by this that he left the farm with only his guitar and disappeared from the world.

Then, on one hot summers day nine months later, as suddenly as he had vanished, Robert Johnson strolled back into town and changed the history of music. The audience at the local juke joint was ready to hear Robert’s comic guitar playing performance, but instead, he walked onto the stage with his guitar and blew the audience away.

No one in the crowd could believe what they were hearing. Robert’s guitar playing had not just improved; he was now the most phenomenal guitar player that anyone, including the masters like Charlie Patton and Son House, had ever heard.

The musicians who had once laughed at Robert were now embarrassed to play alongside him. People began traveling from all over the Deep South to hear him play. He packed the juke joints every night. Robert’s popularity spread quickly, but there was also a strange rumor spreading that Robert had done the unspeakable by making a deal with the devil.

Nobody who heard Robert play the guitar before his musical transformation could believe that he could learn how to master the guitar in only nine months without supernatural help.

The rumor was that a desperate Robert Johnson, distraught over the death of his beloved wife and child, gave up all hope and turned his back on God. He left his farm and traveled to a secret crossroad with only his guitar.

Exactly at midnight, a man dressed in black carrying a guitar, appeared from the shadows and made Robert a deal – Robert’s soul, to be able to play the blues. Robert agreed, and they switched guitars. Robert knew all about the rumor, but never denied it. 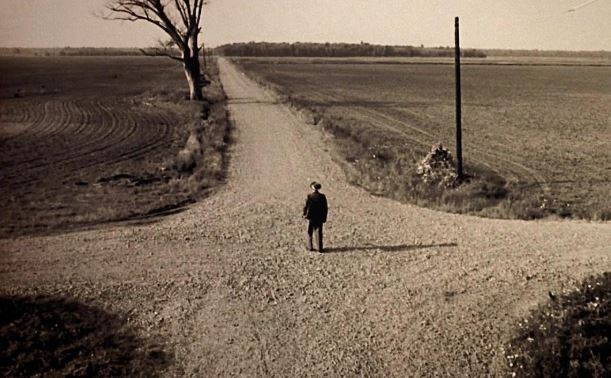 In fact, Robert was playing songs that he had written during his absence like, “Cross Road Blues” and “Hell Hound on My Trail,” which seemed to validate the rumor. Something that made Robert’s playing even more remarkable was that he primarily used the Stella and the Kalamazoo guitars. The Kalamazoo, which Robert painted black, was defective, and the Stella sold by Sears & Roebuck was a very cheap instrument.

Over the next five years, Robert Johnson astonished the music world and rocked juke joints all over the south. In 1936, Robert cut his first record, recording 16 of his original songs.

Thirteen months later, he recorded 13 more songs. Those 29 songs are considered to be some of the most important and influential blues songs ever recorded. Robert Johnson became the first African America to have his music played in the mainstream jukeboxes all across the US. Everyone was listening to the music of Robert Johnson.

In the summer of 1938, Robert returned to Greenwood, Mississippi. The times were tough. The Great Depression had destroyed the farmers and summer heat was suffocating. The town needed a boost and by this time, Robert Johnson was a walking legend. Everyone knew the rumor about him making a deal with the devil.

The community churches warned families to keep their wives and daughters away from Robert, who seemed to have a way of getting any woman he wanted. Robert stood on a street corner and started to play his guitar. After only ten minutes of playing the streets were filled with people for as far as the eye could see. He was offered a job playing at a local juke joint. 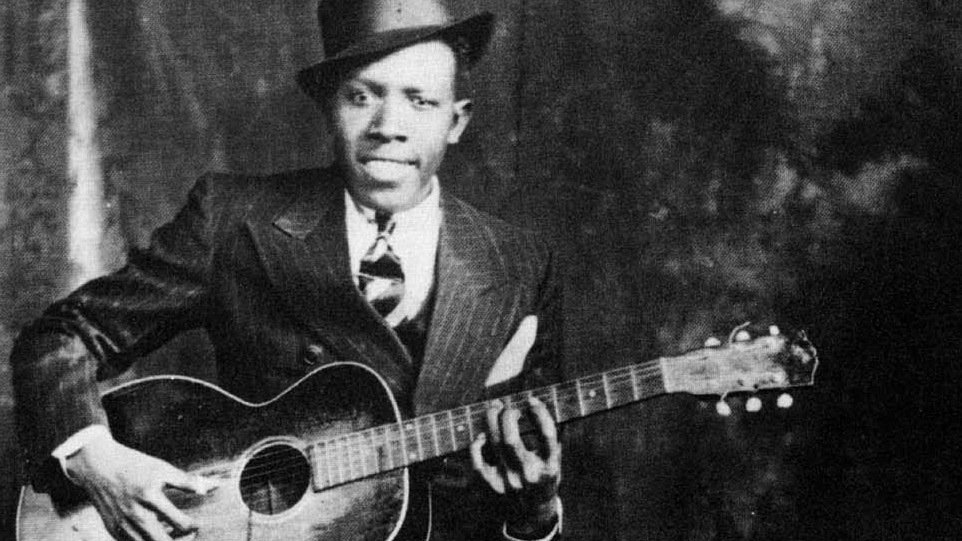 After playing for several weeks Robert started seeing a woman, who just happened to be his boss’s wife. This was not the best career decision. One night Robert walked into a packed juke joint, and drank a half pint of the house whiskey. He sat down and started to play the blues, but became ill suddenly and collapsed.

He was carried back to his hotel room in dire need of medical attention. At this time in the south, no white doctor would see a black patient, and no black doctors would see Robert because of the crossroads rumor. Robert was left in his room alone where he suffered for three days. On August 16, 1938 Robert Johnson, the king of the Delta Blues died.

Many people believed that Robert Johnson had been poised by a jealous husband, but there where those who believed that the devil had return to collect on an old debt. Robert may have even wrote about his death in one of this songs titled, Me and the Devil Blues: “Early this mornin’, ooh when you knocked upon my door, And I said, “Hello, Satan, I believe it’s time to go.”

Even in death, Robert’s story is filled with mystery. Robert’s body was buried quickly, so quickly in fact, that no one knows exactly where he was laid to rest. No one claimed Robert’s body, so the town buried him.

Even though Robert was a famous musician, he was still considered to be a poor black man to the southern community, and they were not going to spend more money burying Robert than they absolutely had too. Robert was given the same kind of burial that a homeless man would receive. A hole was dug in a field and Robert was buried.

There was no headstone or burial marker. Over the years people believed that Robert was buried in a local potters field, but his death certificate says Mount Zion, which is where most people now believe he is buried.

Robert Johnson paved the way for other blues legends like Muddy Waters who had studied Robert’s guitar style when learning how to play. Eventually, the music style of rhythm and blues developed into Rock and Roll. Many of the early Rock legends studied the early work of Robert Johnson. Fifty years after Robert’s death a strange thing began to happen. 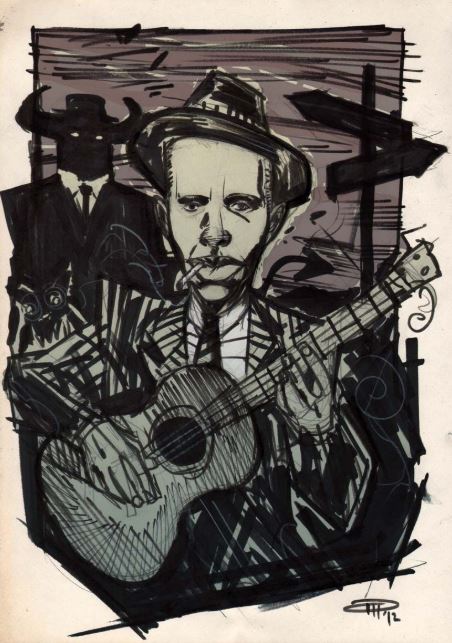 Rock and Roll giants began to cover his songs. Cover songs have been done by Eric Clapton, Lynyrd Skynyrd, the Allman Brothers Band, Led Zepplin, the Rolling Stones, the Red Hot Chili Peppers and countless of other Rock and Roll bands, who still continue to pay tribute to this blues legend.

In 1986, Robert Johnson was honored in the first group of five “forefathers” inducted into the Rock ‘n’ Roll Hall of Fame in Cleveland Ohio. In 1990, a newly released box set of Robert Johnson recordings sold Platinum, and won a Grammy Award. In 1994, the United States Postal Department issued its commemorative stamp of Robert Johnson.

Another strange fact involving Robert Johnson is that he died at the age twenty-seven, the same age as Jimi Hendrix, Janis Joplin, Jim Morrison, and Kurt Cobain when they died. “Oh, can’t you hear the wind howl?” – Robert Johnson.

“If you want to learn how to make songs yourself, you take your guitar and your go to where the road crosses that way, where a crossroads is. Get there be sure to get there just a little ‘ fore 12 that night so you know you’ll be there. You have your guitar and be playing a piece there by yourself…A big black man will walk up there and take your guitar and he’ll tune it. And then he’ll play a piece and hand it back to you. That’s the way I learned to play anything I want.” ~Tommy Johnson