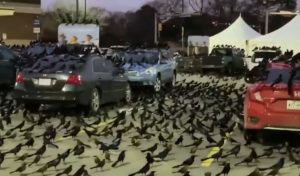 A few days ago, Texas media reported a very strange event in a Houston parking lot. Hundreds of black birds overshadowed the blue sky. They were absolutely everywhere. Scenes looked straight out of Alfred Hitchcock movie The Birds.

The inky-black birds were seen covering the tarmac, cars, shopping trolleys and flitting through the skies.

Superstitious people see a certain sign: it is not just that flocks of black birds appear in the sky. Readers immediately remembered Wuhan (the epicenter of the disease in China), where an invasion of black birds was also observed.

Ornithologists began to talk about bird migration, however, not all believe this to be true.

“The end times,” tweeted one viewer.

Another person said: “Isn’t it some kind of omen?

Others, however, poured cold water on the idea that the birds are a herald of doom.