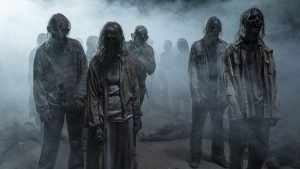 A zombie apocalypse resulting from the outbreak of a mysterious epidemic is a common setting for many films and games, but can something like this happen in reality?

It may be hard to believe, but the script for The Walking Dead is not far from the truth.

You can turn living people into some kind of zombie, for example, with the help of powerful neurotoxins. Daura stramonium toxin will do, causing a powerful disorientation that does not go away for a considerable time. If you give a person a neurotoxin, then his consciousness will change, thanks to which you can inspire him with any crazy idea.

Pronounced amnesia is another commonly reported effect.[33] The onset of symptoms generally occurs around 30 to 60 minutes after ingesting the herb. These symptoms generally last from 24 to 48 hours, but have been reported in some cases to last as long as 2 weeks.

But in the case of neurotoxins, it will not be possible to provoke an “epidemic”, that is, “zombies” will not infect each other.

Therefore, experts called another version of the real zombie apocalypse – this is a scenario with parasitic fungi. In reality, there are such mushrooms – they turn insects into zombies, but are not dangerous to humans. But the situation may change with the appearance of some kind of mutation or as a result of genetic experiments.

There are also infectious diseases that can cause a zombie-like condition. In general, in reality, a situation may well arise when an unfortunate combination of several dangerous factors will provoke a zombie epidemic.

The probability of such a development of events is very low, but still different from zero.