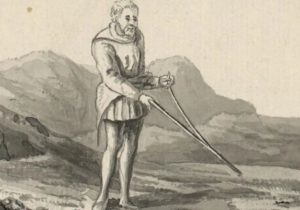 Dowsing is an ancient practice akin to what we now call divination. It has also been called water witching, doodlebugging, and many other names over the years since its creation, though the exact age of the practice is unknown.

The practice of dowsing involves using a dowsing stick, rods, or a pendulum in order to locate something that is lost or simply something that needs to be located. The practice seems to have been performed in many early cultures and societies.

Murals in 8,000 year old caves of Africa depict a scene that may be many tribal people surrounding an elder dowsing. Early Chinese and Egyptian also feature forked tools that may have been dowsing instruments.

Even the religious text of the Bible may include the practice of dowsing as Aaron and Moses are said to have used a rod to locate water. The practice has been used for ages and the practical uses have not ceased to date.

One of the challenges with dowsing is that no one has really been able to describe how or why dowsing works. Even experienced dowsers fail to come up with a suitable explanation for the reliability of the practice.

However, there are a few theories surrounding dowsing that attempt to explain the manner in which dowsing works. In theory, everything, both living and non-living, possess a form of energy force.

Dowsers are able to tune in to the energy force or “vibration” of the specific object. From their tuning, the dowsing rod moves, acting as a sort of antenna or amplifier for the dowser’s ability to tune into that energy. This process allows them to find whatever it is that they seek.

Those that practice dowsing say that it is like most other claims about psychic abilities; it’s a latent ability in humans. This means that anyone could perform the practice with enough training and focused effort.

Still, there are dowsers who are extremely gifted at the practice. Emmy Kittemann was the daughter of a dowser, but her works escalated her to be one of the most renowned dowsers in Germany.

After previous drilling attempts failed to find drinkable water, instead finding only sulfur rich water, Kitteman accurately predicted where the water would be found, at what depth, and identified that it would be rich in iodine content.

Jacques Aymar Vernay was a stonemason used his dowsing ability to track down criminals, leading authorities to the hideouts of murderers on several occasions.

In one very clear testimony to the accuracy of dowsing, dowsers were able to succeed where traditional methods failed more often than not in a test to find water. Professor Hans Dieter Betz fielded a team of scientists to test the abilities of dowsers to find drinkable water underground.

The physics professor from Munich University ended up taking the dowsers to 10 different countries. He listened to their advice when they recommended an area to sink a well and found an astoundingly high rate of success.

Sri Lanka in particular was said to be a very difficult location geologically, but upon the recommendation of the dowsers, nearly 700 wells were drilled. The success rate in Sri Lanka was 96%, well above their competition of geohydrologists.

To this end, the German government has funded the use of dowsers in arid zones of Southern India to find drinkable water.

Dowsing can be done in a variety of methods. The forked stick method is the most traditional and common method of dowsing. It involves a small y-shaped branch, traditionally a willow branch.

The dowser holds the branch parallel to the ground and walks over the area to be probed. The end of the branch will be drawn downwards toward the spot where the sought items could be found. Rods are also used. These are generally L-shaped and held in pairs.

The signification of finding for this method involves the rods either swinging apart or crossing each other. Some very skilled dowsers do not need to rely on being near the object to find them.

With simply a map of the area and a pendulum, they are able to locate the target area for the discovery of sought objects. The pendulum will move in a circle or back and forth when the correct area has been found.

Though dowsers are adamant in their support for the practice, it is only natural that skeptics deny the process. Skeptics believe there is nothing about the process of dowsing that is legitimate, even discrediting those that have a successful record with the practice.

They claim that those that are successful are gifted with very accurate instincts or training in order to find the water, minerals, and other substances that can be found. Others insist that successful dowsers have simply been lucky in their findings.

To date, there has been no definitive scientific proof for either side of the argument, but one of the greatest scientific minds of recent history was convinced that the practice was, in fact, legitimate.

He is recorded to have believed that scientists were making an error in their treatment of dowsing as ancient superstition. Instead, he offered that the practice of dowsing relied on the human nervous system responding to unknown factors through the aid of the dowsing instruments.

Despite specific scientific explanations for the practice, it is hard for some to deny the practical applications that dowsing has been used for, even in recent history.

Dowsing has been used not only to find sources of water, but missing persons, objects, and animals as well. If there is more success similar to Professor Betz’s test, it will be hard to deny that the practice has merit.

How Science Supports the Sixth Sense