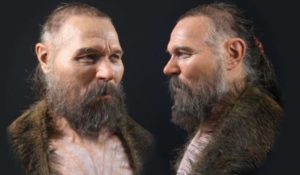 Swedish scientists managed to restore the appearance of a man who was executed about 8000 years ago. Specialists discovered the skull of a man, as well as the remains of 11 other people, one of whom was a baby, at the bottom of the lake, which dried up in 2012.

Experts noted that several pointed stakes were preserved along with the remains. These could be the attributes with which the execution was carried out in the Stone Age. Only one of the detected skulls had a lower jaw.

It was this skull that was chosen by medical examiner Oscar Nilsson in order to make a 3D reconstruction. Additionally, during the study, data obtained as a result of genetic analysis were used. Due to this, specialists were able to recreate the face of a man with dark hair and blue eyes, whose age was approximately 50 years.

Nilsson did everything possible so as not to damage the discovered skull. That is why computed tomography was used. The results of this study were used to further print a 3D copy made of vinyl.

Additionally, an analysis was conducted for which forensic methods were used. Due to this, it was possible to establish the approximate weight and height of the man, as well as his ethnic origin.

The specialist believes that this person was part of a group of gatherers and hunters. His ancestors could come to the territory of Scandinavia. It is worth noting that Nilsson had previously conducted similar studies and restored images of people from ancient remains discovered by archaeologists.