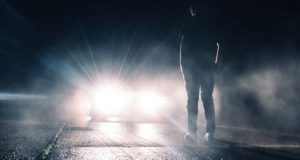 The history of the Des Moines, Iowa, the area can be traced back to 1600s, when Trappist Monks (Moines de la Trappe) who lived in huts at the mouth of the Des Moines River lived and died there over the course of many years while trying to convert the Iowa Natives to Christianity and the European way of life.

Later, French Colonial voyagers went up and down the many rivers around what would later become the city of Des Moines. These Colonial French trappers worked the Des Moines area for many years, fueling the lucrative fur industry that focused on buying and selling pelts to Natives for the European fur trades. Iowa has a colonial past that stretches as far back as some of the earlier original colonies.

There is a ghostly legend that has its roots in Iowa’s Colonial past. This story has been going around for many years and tells of a walking spirit out looking for something on a lonely stretch of Interstate 80 in Mitchellville—a few miles northeast of Des Moines.

Who knows if the Colonial apparition is just trying to get home or is searching for someone. Maybe he’s looking for his lost horse that left him stranded in Iowa’s open plains?

Sightings of this ghost have been reported by dozens of people over many years in the section of highway between Mitchellville and Des Moines. A man dressed in colonial attire has been seen walking across the interstate and along the side of the road searching for something.

Many people who have seen him initially believe he is a Colonial reenactor or someone dressed for a costume party. However, this entity is seen for only a few brief moments before he vanishes into thin air as onlookers watch in horror and disbelief.

The woman told us that one cold night back in 1998, on the way home from a basketball game in Des Moines, she and her husband were driving home and both saw the image of a man dressed in full Colonial garb walking east on I-80 just west of Mitchellville. It was late at night between 10:30 and 11 p.m.

She went on to say they couldn’t see the man’s face, but they did notice how he had a kind of faint glow when she first saw him.

As they got closer, almost a hundred feet or less, she flicked her lights on bright to get a better look at the man, and that’s when he suddenly disappeared right before their eyes. She turned to her husband who was sitting beside her, and his mouth was wide open.

They both talked to other people including friends, family, and co-workers about this incident that left them both in shock and awe. They soon learned that they were some of the many who have seen this phantom.

Paranormal researchers believe that the intensity of the emotional pain, physical pain, and violent death—especially on a large scale—leaves a powerful imprint in psychic space, an invisible realm around us. The battles end in real time, but continue and repeat in the invisible realm.

A haunting occurs when people are able to experience this invisible realm, even if briefly. Some researchers also think that some of the souls of dead soldiers become stuck, or earthbound. They linger at the place where they died, not knowing where to go or even how much time passes by.

People who believe that such sightings are real have theorized that witnesses are experiencing retrocognition, an ability to see images from the past.

Others have suggested that the traumatic nature of warfare causes people who have died during a battle to leave “psychic residue” of themselves at the site of their deaths, and this residue is responsible for the images. Skeptics, however, say that such images are hallucinations or fantasies.