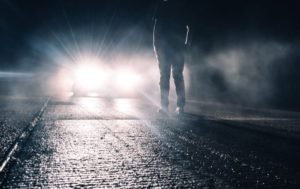 Real horror is not limited to movies. Our reader was convinced of this more than 20 years ago. Here is his story.

Back in 1999, I was driving a shortcut from Twentynine Palms, CA to Albuquerque, NM. Twentynine Palms is located in the desolate high desert east of LA. The shortcut was all two lane road through total nothingness, except for passing through Amboy, CA.

Amboy is a nearly abandoned town nearly as far below sea level as Death Valley, with a dormant volcano and lava field on one side and a salt flat on the other. It was also, at the time, a hotspot for satanic group activity.

So I was driving by myself in the afternoon. I stopped in Amboy and snapped a picture of the city sign, just to prove I was there to friends who dared me to take that route to I-40. I got back in my car and proceeded to drive up into the mountain range between Amboy and I-40.

Once I reach the top I am driving north through a canyon with high grass on both sides of the road. Up ahead I see some stuff in the middle of the road. As I approach I slow down to see a red Pontiac Fiero stopped sideways across both lanes, a suitcase open with clothes scattered everywhere and two bodies laying face down in the road, a man and a woman.

I stop a hundred feet or so away and the hair on the back of my neck is standing up. Being a Marine, I reach under the seat and pull out a 9mm pistol and chamber a round. Something seemed very wrong, it looked too perfect as if it were staged. An ambush? Was I being paranoid? Something was just wrong. Getting out of the car seemed unthinkable, it was the horror movie move.

As I scanned the road I saw a line I could drive. Pass the guy in the road on his left, swerve to the right side of the woman, behind the Fiero and I’d be on the other side. I dropped it into first gear, punched it and drove the line I planned.

I passed the back of the Fierro without hitting it or either of the bodies in the road. I continued forward a couple hundred feet and slowed down so I could breathe and let my heart slow down. As I looked up into the rearview mirror I saw that the two bodies had gotten up to their knees and twenty or so people emerged from the tall grass on either side of the road by the car and bodies.

At that moment my right foot smashed the gas pedal to the floor and did not let up until I had to slowdown for the I-40 east onramp.

I will never know what would have happened to me had I gotten out of the car to check on the bodies or stopped my car closer to them. Somehow I do not think it would have been good. Sometimes real life can be scarier than a movie.