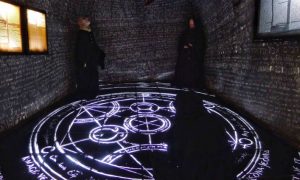 The occult, that amalgamation of believes dealing with supernatural phenomena or concepts beyond the realm of human understanding, is not easy to define.

The occult means something different to different folks.

An unbiased definition would be “that which is concealed or hidden from view.” “Inscrutable” would also be an impartial designation. Taking that idea one step further, the occult could even be labeled as the paranormal, mystic, ghostly and even the weird or bizarre. However, there is an element of exclusivity and in many people’s opinion, of evil, in the occult.

Religious View of the Occult

Both, Christianity and Islam view occult practices as the worshiping of the devil. Christians and practitioners of Islam consider that anything spiritual that is not achieved by and/or through God is the work of an evil entity. Fundamentalist Christians take it even a step further, categorizing occultism as anything beyond that which is revealed in the Bible.

Judaism is a bit different. Certain individuals, like some rabbis or their students over the age of 40 are allowed special studies such as the Kabbalah, esoteric teachings that try to explain the relationship between God and the Universe.

There are various other far Eastern religions that do practice divination, worship of angels and several other rituals that could be considered occultist.

Science vs. the Occult

Science is the a systematic activity of assembling knowledge about the world and organizing that knowledge into testable laws and theories It is done through observation of natural occurrences, and/or tests that try to replicate natural procedures in a controlled environment.

Most occultist practices are based on faith: a trusting reliance on things that are not known or physically verifiable.

And there lies the dilemma: the concepts of the Occult cannot be verified by observation and experimentation because they rely on philosophical postulations.

Of course, the term “occult” is all encompassing; it include multiple, often unrelated practices. Some of the most common of these systems are:

Palmistry or palm reading – The practice of interpreting a person’s past and future by deciphering the lines and marks in the palm of their hands.

Tarot cards – The use of a specific set of cards to predict a person’s future.

Ouija board – A board that involves interactions with spirits that answer questions by guiding a sliding unit known as a planchette.

Spiritism – The belief that there is a world inhabited by spirits and that through the use of a medium communication can be established between particular spirits and living people.

Channeling – Closed related to spiritism, but the medium does not have to be a human being; it could be an instrument such as the Tarot cards or the Ouija board.

Voodoo (or Santeria) – Belief in and practice of religions derived from African practices.

Satanism – The worship of Satan as the supreme deity.

Celestine prophecy – The belief that life’s purpose is not found in religion or philosophy but in auras or energies.

Witchcraft – The study of Wicca and the use of magical powers, rooted in Pagan religion.

Sometimes, the belief in vampires, werewolves, the raising of the dead, UFOs and extraterrestrial are included in the occult.