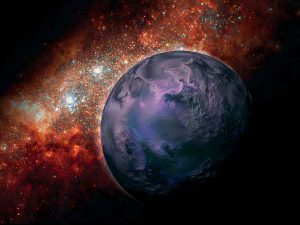 Currently, the best way to look for alien life in other star systems is to look for biosignals: the presence of certain molecules in the atmospheres of distant worlds. Oxygen and methane are prime candidates for the search.

Now researchers at the University of California, Riverside have put forward the case for a different type of gas, nitrous oxide, commonly known as laughing gas.

There are several biological processes that produce this substance, and the team’s models suggest it can be detected in the atmospheres of nearby exoplanets using the James Webb Telescope (JWST).

“In a star system like TRAPPIST-1, the closest and best system for observing the atmospheres of rocky planets, nitrous oxide could potentially be detected at levels comparable to carbon dioxide or methane,” said study lead author Eddie Schwieterman, an astrobiologist at the University of California, California.

The formation of nitrous oxide is mainly due to microorganisms, some of which can use nitrate to fuel their cellular metabolism, releasing laughing gas in the process.

“Life produces nitrogen waste, which some microorganisms convert into nitrates. These nitrates build up in the aquarium, so you have to change the water,” added Schwiterman. “However, under the right conditions in the ocean, some bacteria can convert these nitrates into nitric oxide. The gas then seeps into the atmosphere.”

This is where telescopes can detect it. Previous studies ruled out the possibility of detecting nitric oxide, because there is not so much of it on Earth anymore.

However, the team of researchers believes that this conclusion does not take into account that exoplanets may have conditions more suitable for the formation of this gas. Also, stars that are dimmer than the Sun would be less likely to split this gas into its constituents.

“This conclusion does not take into account periods in the history of the Earth when ocean conditions would have allowed much greater emission of nitric oxide by organisms. Conditions during those periods may reflect where the exoplanet is today,” Schwiterman said.

The research team is confident that nitric oxide is a strong contender to look for biosignals in other parts of the galaxy.

“There has been a lot of speculation that oxygen and methane are biosignals. Few have seriously considered nitric oxide, but we think that this may be a mistake,” concluded Schwiterman.

The work was published today in the Astrophysical Journal.