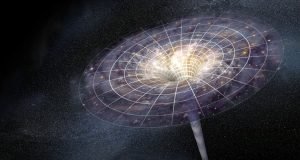 Astrophysicists have suggested that our universe could exist inside a four-dimensional black hole.

Our cosmos began as a singularity, a point in space that was infinitely hot and dense. According to CERN researchers, black holes in our universe may have the same characteristics as those described by the scientific community.

Black holes are formed when huge stars die and collapse into an incredibly dense mass from which not even light can escape. Scientists call the event horizon the limit of space where light cannot escape and no object can return.

In the first trillionth of a second after the Big Bang, the universe began to expand at a rate faster than the speed of light. Until that time, space did not exist, therefore, there was no universal speed limit either. That is, the expansion of space slows down over time.

Einstein’s theory of relativity states that huge objects “curve” spacetime, hence the spacetime around a black hole is curved. It would be virtually impossible to see black holes if not for the light and heat they absorb.

The more matter a black hole absorbs, the larger it and its event horizon become. As the black hole expands, the rate at which matter falls decreases. To an outside observer, because of the strong gravity, it seems that nothing is moving. According to the theory of relativity, from the point of view of someone being sucked into a black hole, time seems to be normal.

Are we inside a black hole?

It is impossible to calculate what happens at the singularity of a black hole, so we get infinities, while the event horizon can be calculated using modern knowledge and equations.

That information is the information of our universe. Surprisingly the math adds up and solves the need for answers to much-needed questions regarding our universe and black holes.

“Is that the big bang hypothesis has our relatively comprehensible, uniform, and predictable universe arising from the physics-destroying insanity of a singularity. It seems unlikely,” says researchers at the Perimeter Institute and the University of Waterloo.

It is hard to imagine that our universe may exist inside another universal black hole. The black hole hypothesis seems to add up and fill in the missing pieces that scientists and experts have been chasing for a lifetime, leading us to believe our universe is vaster and a lot stranger than we once could’ve imagined.

Life in the solar system may have first originated on Mars, not Earth