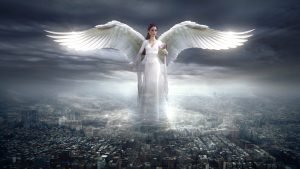 Who are angels? And do they even exist? Or maybe they once existed? These are the questions that the British pastor Wilfrid Harlton raised.

The fact is that in the medieval writings of Europe it is often indicated how creatures with white wings descended from heaven and took the fallen soldiers from the battlefield.

For example, in 1426, battles took place in Italy, the so-called Hussite wars. In one of the major battles, the sky opened up, lit up with bright light, and dozens of winged men and women descended onto the battlefield and began to circle, distracting the warriors.

In the end, people returned to the battle, which greatly angered the mysterious messengers, and they began to throw golden lightning, hitting people with them.

A similar case is known in Sweden. In 1501, the Danish-Swedish War began. During it, serious skirmishes periodically occurred, and otherworldly forces intervened in one of them.

According to one version, they revived the dead soldiers of the Danish army. According to another, the wounded were taken to heaven. Both cases are described in the annals of battles.

In addition, Wilfrid Harlton found similar evidence among Africans and Arabs. Moreover, the descriptions are extremely similar to each other, as well as the situations in which angels were shown to people.

According to the British pastor, this suggests that either these stories were rewritten by different peoples, or the events really happened in reality.

In his opinion, the civilization of angels are highly organized and more developed beings living in another dimension and only occasionally appearing in our world.

“They are not angels or angelic beings. They are not spiritual entities. They are beings who are coming to your world for resources, for alliances and to gain an advantage in an emerging world. They are not evil. They are not holy. In that, they are also much like you. They are simply driven by their needs, their associations, their beliefs and their collective goals.”

Due to their level of development, the angels practically abandoned technical means. Although Harlton is confident that their wings and suits are high technology, thanks to which they can travel between worlds and anywhere in the universe.

If Wilfrid Harlton is right, then legitimate questions arise: if angels are a highly developed civilization and really exist, then what about demons?

Are they also advanced aliens? Do they also have access to our reality? Maybe the representatives of these two civilizations simply bring into our lives what we consider luck, fate, miracle, chance, and so on?