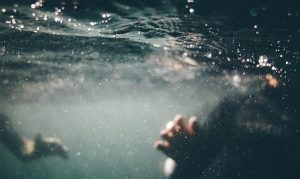 Anomalien.com reader Bryan shares his story about an encounter with the unexplainable.

My name is Bryan, and I am serving in the U.S. Navy overseas in Guam. I am twenty years old now, and I have lived in Houston, Tx. for most of my natural life.

When I was ten year old however, my fathers company had a company picnic on Galveston island. My brother and I had just finished eating, so we took off for the beach, forgetting to tell my father where we would be.

We got to the shoreline, and I dove into the water as my brother stopped to play in the sand. I began swimming out to a sand bar, but as I kept swimming, the current began to drag me further and further from the shore.

When I realized that I could no longer touch the ocean floor, I began to panic. I screamed for my brother and began to thrash in the water wildly. My brother stood up and ran for the beach house where my parents were, but my energy was running out, and I began to sink below the surface.

As I did, I could see only brown water above me. After a few seconds however, I saw a mans face appear above where I was. He reached down into the water, and brought me to the surface.

This man was very fit, and he had almost perfect features. He was unusually quite, and he made no facial expressions at all. He was almost inhuman in a way. He brought me to where the water came up to my knees, and then he sat me down.

I leaned over to catch my breath, but when I stood up to thank him, he was gone. I walked the rest of the way to the shore and asked my brother if he had seen the man who had just saved my life.

He looked at me with a crazy expression, and said “What man, we are the only ones on this beach. There is no one else in the water.”

As I looked around, I saw that this was true. He had told me that the reason he was going for help, was because no one else was out there. A very creepy feeling came over me, and I stared at the ocean for a while.

I still wonder to this day who that man really was.