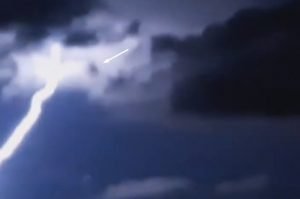 We recently wrote that during a storm in San Antonio, a dark mysterious object fell from the sky during a lightning strike. Now the same thing happened in Argentina.

This footage was captured on October 27, 2019 near Entre Ríos in San Antonio de Padua de la Concordia, a city in Argentina by Jésica Bonasola, reports Youtube channel “The Hidden Underbelly 2.0”.

As in the first case, it is unknown what the object might have been but what makes it weird is that it’s faster than the lightning.

Author of the video states the following:

“I was returning from the big jump lake because a storm was approaching, I turned on my camera in order to be able to capture a lightning bolt in slow motion, when I reviewed the footage I could see something descending at its side.”

What is falling from the sky?