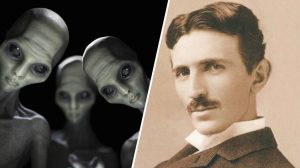 Tesla later went public with his claim that he was receiving extraterrestrial voice transmissions and was subjected to the usual humiliating ridicule that greets UFO witnesses today when they try to speak openly of their experiences. But he remained firm in his conviction that the voices were genuine and posed a terrifying threat to life on Earth as we know it. Global Communications publisher Tim Beckley provided more input on the connection between Tesla and UFOs.

“There are many who believe,” Beckley said, “that Tesla was actually a ‘star child’ of sorts, that he was born on another planet and left on the doorstep of his adoptive parents. This speculative theory was first offered in a long out-of-print book by Margaret Storm and a later tome by Commander X titled ‘Nikola Tesla: Free Energy and the White Dove.’

“The idea that Tesla was born off-planet,” Beckley continued, “seems to have originated with a gentleman named Otis T. Carr. A Baltimore Doctor and inventor, Carr claims that he worked side-by-side with Tesla for years and that he discovered bits and pieces of the great inventor’s life that no one else knew about, including the fact that Tesla wasn’t originally from ‘here.’”

According to Beckley, Carr later went on to invent a saucer-shaped device that he said for a mere $14 million would take us to Mars or somewhere else nearby in the solar system.
“Carr was a controversial figure in his own right,” Beckley added, “but no one has been able to prove that he didn’t work with Tesla in Manhattan, where Tesla was living in the New Yorker Hotel near Herald Square. We do know that Tesla was fascinated with the possibility of life on other planets.”

Beckley reiterated Swartz’s statements regarding Tesla’s attempts to establish contact with the aliens via radio.

“And he might have been successful in reaching out to the stars,” Beckley said. “Furthermore, Tesla is said to have even developed a ‘Tesla Scope’ that anyone could use to make contact with extraterrestrials. The device was on display in Canada for several years before its owner passed away.”

Now a few words about the title of Swartz’s book. Tesla died in 1943, in poverty and relative obscurity. As he moved from hotel to hotel, staying one step ahead of his debts, he often left behind whole suitcases full of notes and diagrams for unfinished inventions. Legend has it that after he died, the federal government stepped in and confiscated the material, believing it contained designs for new weapons devices and therefore was relevant to national security.

But apparently a few things slipped through the fingers of the government. At a 1976 auction in Newark, New Jersey, a collector named Dale Alfrey bought four boxes of papers for around $25. Alfrey at first thought he had purchased the notes of a science fiction writer and had no idea of the importance of what the boxes contained. Twenty years would pass before Alfrey began to actually read the material and to try to preserve the badly mildewing papers by scanning them into his computer. While he was absorbed in this effort, he was visited by a trio of Men-In-Black who looked to him like “undertakers.” They offered to buy the papers from Alfrey, who replied that they weren’t for sale.

After further discussion, which included some disturbing threats from the MIBs, the three visitors turned in unison and walked away. Alfrey felt himself to be regaining consciousness after being in a kind of trance. When he rushed back inside, the papers were gone, and so was the hard drive to his computer. He never completely recovered from the experience with the MIBs, but he did retain enough of what he had read of Tesla’s lost journals to be sufficient for Swartz’s book. Meanwhile, newspaper accounts from the time of Tesla’s death related that a dozen large boxes of Tesla’s notes may still be unaccounted for, perhaps waiting to be rediscovered and give up their secrets in our time.

This newly revised and expanded second edition of “The Lost Journals of Nikola Tesla” by Tim R. Swartz also contains new chapters on Time Travel, Alternative Energy, and Nazi flying discs, all of which help to expand the range and depth of the legacy Tesla has left to us to assist in our 21st century groping for technological mastery of our world. If we ever learn to travel in time or to take our energy directly from the forces animating the universe or even to slip the surly bonds of Earth in a disc-shaped craft of human design, our debt toNikola Tesla can only increase.

“I do not think there is any thrill that can go through the human heart like that felt by the inventor as he sees some creation of the brain unfolding to success. …Such emotions make a man forget food, sleep, friends, love, everything.” (Nikola Tesla)