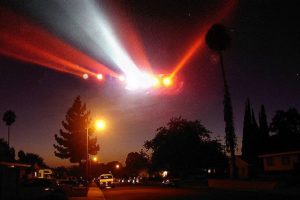 On an early September morning, people witnessed something unusual in the skies above Exeter. The USAF told them it was due to Air Force operations. The townspeople became angry and wrote to their Congressmen, which resulted in a hearing before the House Armed Services Committee.

September 3, 1965, 2 AM, 18- year-old Norman Muscarello was walking home to Exeter. Things would change that night when he saw what he called the “thing.”

As he was walking on the last hill on the way to town, he saw a strange glow by the country store. Then he saw a huge ball of blue and red light. While he walked through a field, the thing flew over the trees and went over a farmhouse.

Initially, dogs barked and horses whinnied, then there was an overwhelming, unnatural silence. Norman jumped into a ditch to hide from the UFO. He couldn’t ascertain what it was. The lights were too bright for him to see its shape. It headed east and disappeared, growing smaller and smaller.

Norman told police officer Gene Bertrand about his experience. The officer had just taken a report from a woman who was traumatized by a glowing ball of red light that chased her car. 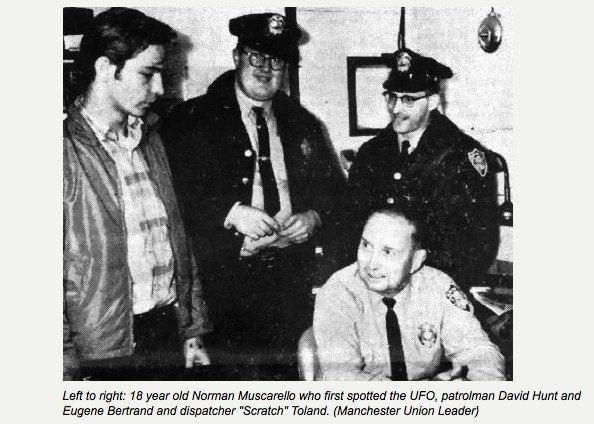 The two men went to the field where Norman saw the UFO. David Hunt, the other officer, pulled up in his cruiser behind them. Suddenly, the UFO appeared over the tree line and remained there for about five minutes before taking off.

After the sighting, Norman and Gene returned to the police station where they learned about other sightings. A man claimed he had been chased by an object with red flashing lights.

A school teacher saw it and felt static electricity. The hairs on his arms and head stood up.

“Explanations” and a Hearing

The Pease AFB commander tried to explain the sightings during a press conference at night in the field where the object was seen. He claimed the sightings were the lights at Pease, which were turned off, and radioed the base to turn them on. No one saw anything.

After this, the Air Force claimed that it was beginning a thorough investigation of the UFO. USAF Maj. Hector Quintanilla, Jr., then chief of Project Blue Book, wrote a letter to EPD, explaining that the sightings were possibly associated with USAF operations.

The Pentagon issued an additional statement suggesting that the UFO might have been a misidentified star or planet.

The townspeople were angry with the way the USAF handled the incident and wrote to their elected officials. Congressman Gerald R. Ford convened a special congressional hearing about this.

On April 15, 1966, under public pressure, it was held before the House Armed Services Committee. The USAF admitted the object had been unidentified from the start, didn’t know where it came from and had no control over the situation.