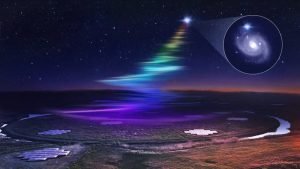 Typically, intense radio signals, the so-called bursts, can only be detected once, after which they do not repeat.

The first object that is capable of emitting repeating signals was found in 2016, and for several years there were no analogues.

A more detailed study showed that there is a second one – it was recorded in 2019, but only now the researchers were able to make sure that the radiation is constantly present, reports CNN.

Between intense bursts, the object, named FRB 190520, generates a weak pulsating signal. Observations from the Earth helped to establish the location of the object – a dwarf galaxy at a gigantic distance from our planet – more than 3 billion years.

Moreover, the data received from the radio signal and those that made it possible to calculate the distance do not match, according to astrophysicists, this may indicate a large amount of interference in the signal path.

“Are those that repeat different from those that don’t? What about the persistent radio emission — is that common?” said Kshitij Aggarwal, a graduate student in the Department of Physics and Astronomy and the Center for Gravitational Waves and Cosmology at West Virginia University.

The astronomers suggest that there may be either two different mechanisms producing FRBs or that the objects producing them may act differently at different stages of their evolution.

Could this be an SOS signal from an ancient civilization? Or is it a natural phenomenon in the universe?

Big questions still remain, and this mysterious object is giving us challenging clues about this phenomenon. What is the object itself – scientists do not yet know.