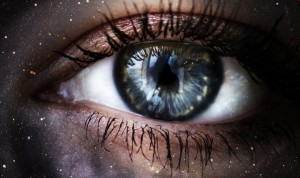 Dr Chris Roe places a pair of enormous fluffy earphones over the head of a blonde 20-year-old woman. He carefully slices a ping-pong ball in half and places each piece over her eyes. He switches on a red light and leaves the room.

After a few moments, the gentle hiss of white noise begins to fill the laboratory and the woman begins smiling sweetly to herself. Images of distant locations start to pass through her mind. She can sense a group of trees and a babbling brook full of boulders. Standing on a boulder is her friend Jack. He’s waving at her and smiling manically. She begins to describe the location to Dr Roe.

Half a mile away her friend Jack is, indeed, standing on a boulder in a stream. The woman can ‘see’ Jack in her mind’s eye even though all of conventional science – and common sense – says it is impossible. Is this a bizarre coincidence or proof that we all possess hidden psychic powers of the type popularised in such films as Minority Report?

Startling as it may seem, the results of Dr Roe’s experiments suggest that it is indeed possible to project your “mind’s eye” to a distant location and observe what is going on – even if that place is hundreds of miles away.

In fact, Dr Roe’s results suggest that up to 85 percent of people possess the psychic power of clairvoyance – or the ability to remote view in technical parlance. They provide the strongest evidence yet for such psychic powers and may help explain the skills shown by mediums and account for such phenomena as ESP and déjà vu. And it would appear that we can all sharpen our psychic skills with only a modicum of training.

Such results follow on from the release of formerly top secret military papers revealing that the armies of several countries have used clairvoyants – or remote viewers – to gather intelligence.
Next month Dr Roe plans to go even further and see whether it is possible to project your mind’s eye to a distant location and observe what will happen at a predetermined time in the future.

“Our results are significant,” says Dr Roe, a parapsychologist working at the University of Northampton. “They suggest that remote viewing, or clairvoyance, is something that should be taken seriously.

“It’s main use in the past has been for gathering military intelligence so a lot of the more interesting work is classified. There are even anecdotal accounts of remote viewers being used to hunt Saddam Hussein.”

Whilst Dr Roe’s work may appear controversial, he is starting to garner the support of eminent scientists.

Professor Brian Josephson, a Nobel Prize winning physicist from Cambridge University, says: “The experiments have been designed to rule out luck and chance. I consider the evidence for remote viewing to be pretty clear-cut.”

The military is also taking a keen interest. The Ministry of Defence takes the phenomena seriously enough to have commissioned its own research. In fact, most of our knowledge on clairvoyance is based on recently declassified military research undertaken during the Cold War.

During the 1960s and 70s, paranoia gripped the American military establishment. Strange rumours began circulating that the Russians had found a way of harnessing psychic powers and begun wielding them as weapons. Psychic skills such as telekinesis – the ability to move objects or control machines using nothing more than the power of the mind – were apparently being taught to soldiers in elite combat units. They were also using clairvoyants to gather intelligence from top secret American bases. If true, the American’s fretted, it would mean that the Russians could discover their most important secrets, control the minds of their generals, and perhaps render their nuclear weapons obsolete.

In the early 1970s, the US military began its own top-secret research to close the “psychic gap” with the Russians. The CIA later joined them and projects Sun Streak, Grill Flame, and Star Gate were spawned. These were designed to track down the most gifted psychics in the US military, unravel the mysteries of their powers, and then find ways of teaching these skills to ordinary soldiers and agents. The aim was to produce a new breed of ‘super-soldier’ capable of controlling matter with their minds and gathering intelligence from afar.

But some in the military wanted to go even further. Major General Albert N. Stubblebine III, commanding officer of the US Army Intelligence and Security Command, hoped to teach his soldiers to walk through walls. And if that wasn’t enough, some in the US Navy wanted to send confidential orders to their nuclear submarines using telepathy and remote viewing.

Researchers at Princeton, where Einstein was based, and Stanford, soon began investigating the paranormal. Stanford Research Institute began hosting the Star Gate project and made many startling discoveries which appeared to show that ordinary people possessed psychic powers. What’s more, these powers could be enhanced using simple training techniques such as meditation.

Scientists at Stanford quickly focused on the use of clairvoyance, known as remote viewing in technical parlance, as the most militarily useful psychic skill. Very soon, Stanford played host to more than a dozen psychic spies. Their skills were once demonstrated to President Jimmy Carter when they were used to search for a downed aircraft.

The remote viewers used a deceptively simple method based on what is known as the Ganzfeld technique. They induced an altered state of consciousness by seating themselves in a sound proof room and wearing earphones playing white noise. Ping pong balls sliced in half were placed over their eyes to obscure vision. The whole room was then bathed in soft red light.

The map coordinates of the ‘target’ would be written on a piece of paper, placed in an envelope and handed to the viewer. He would be allowed to touch the envelope but forbidden to open it. Alternatively, pictures of the target location would be sealed in the envelope. The remote viewers would then slip into a light meditative trance and their “minds eye” would be drawn to the target location. Pictures, feelings and impressions would then drift into their minds from the target, which might be located thousands of miles away.

To an outsider, this approach might appear to produce only hopelessly vague results that were no better than guesswork. But the scientists investigating remote viewing found them to be surprisingly accurate and the military found them useful too.

Joe McMoneagle was “Remote Viewer #1”. His primary role was to use remote viewing to look inside Russian military bases and gather useful intelligence.

McMoneagle was recruited from US Army intelligence in Vietnam because of his amazing ability to survive whilst reconnoitring behind enemy lines against seemingly impossible odds. His commanding officers thought he was either amazingly lucky, psychic or a double agent. He was tested for his remote viewing skills at Stanford and found to be psychic. He went on to spend the next 20 years tracking Russian nuclear warheads an d gathering intelligence. His work eventually earned him the Legion of Merit, America’s highest military non-combat medal.

“My success rate was around 28 percent,” says McMoneagle. “That may not sound very good but we were brought in to deal with the hopeless cases. Our information was then cross-checked with any other available intelligence to build up an overall picture. We proved to be quite useful ‘spies’.”

Word of America’s experiments with the paranormal spread to the UK and the Metropolitan Police were one of the first to informally use remote viewers to tackle crime. One of their most useful informants was Nella Jones, who first came to their attention when she located the stolen Vermeer painting The Guitar Player in 1974.

Nella was ironing some clothes and idly watching the television when her mind suddenly focused on the whereabouts of the painting. She hurriedly sketched it out and took it to the police who were understandably sceptical. Having nothing else to go on they decided to follow her leads. The painting was eventually recovered as a result of the information she gave them.

It would be easy to dismiss Nella’s guidance to the police as just blind luck. Easy, that is, if she hadn’t spent the following 20 years helping them ensnare murderers and other serious offenders.

“Nella gave invaluable assistance on a number of murders,” says Detective Chief Inspector Arnie Cooke. “Her evidence was not the type you can put before a jury. But senior investigating officers have got to take people like her on board and accept what they are saying.”

So useful was Nella to Scotland Yard that in 1993 they publicly thanked her and senior officers hosted a dinner in her honour.

Scotland Yard later wrote to her saying: “Some police officers may have seemed sceptical of your abilities….. but it is a mark of those abilities that police turn to you time and time again.”

Not to be outdone, in 2002 Britain’s Ministry of Defence began conducting its own secretive remote viewing project. Documents recently released under the Freedom of Information Act and seen by the Daily Mail detail a “UK eyes only” series of experiments. Unfortunately, much of the experimental details and the results are still classified and the MoD refused to say whether they were a success or not. Releasing such details would imperil the defence of the nation claims the MoD. What little information that is available is described as “poor quality” by Dr Roe.

“Their analysis of the data is quite frankly, woeful,” he says.

The MoD documents unfortunately raise more questions than answers, chief of which is; does remote viewing actually work? The evidence is intriguing and compelling in equal measure. Clearly the Metropolitan Police value it, and the CIA and the US military found powerful evidence that seemingly ordinary people are clairvoyant.

In 1995, the US Congress asked two independent scientists to assess whether the $20 million they had spent on psychic research had produced anything of value. And the conclusions proved to be somewhat unexpected. Professor Jessica Utts, a statistician from the University of California at Davis, discovered that remote viewers were correct 34 percent of the time, a figure that is way beyond what chance guessing would allow. In fact, it’s billions to one against.

She says: “Using the standards applied to any other area of science you have to conclude that certain psychic phenomena, such as remote viewing, have been well established. The results are not due to chance or flaws in the experiments.

Of course, this doesn’t wash with sceptical scientists. Professor Richard Wiseman, a psychologist at the University of Hertfordshire, refuses to believe in remote viewing.

He says: “I agree that by the standards of any other area of science that remote viewing is proven but that begs the question ‘do we need higher standards of evidence’ when we study the paranormal? I think we do.

“If I said that there is a red car outside my house you would probably believe me. If I said that a UFO had just landed you’d probably want a lot more evidence. Because remote viewing is such an outlandish claim that will revolutionise the world, we need overwhelming evidence before we draw any conclusions. Right now we don’t have that evidence.”

Dr Chris Roe hopes he can provide such proof one way or the other. Next month he will embark on a series of experiments that will be more rigorous than any other attempted before. They will rule out fluke positive results and any unconscious biases held by anyone involved with the experiments. Perhaps more importantly, he will be free of any shackles imposed by the military.

“Time does not seem to be a barrier to remote viewing,” says Dr Roe. “Although there are some problems with the boggle threshold.”

Although such ideas do indeed boggle the mind, that, of course, does not necessarily mean they are not true.