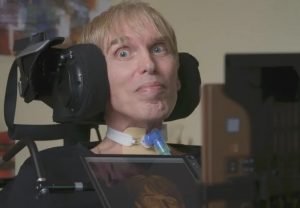 Struck by motor neuron disease, Dr. Peter Scott-Morgan wanted to rethink what it means to be human.

Humans augmented by technological enhancements have been a staple of cyberpunk sci-fi for years, but for robotics expert Dr. Peter Scott-Morgan, creating the ability for physically handicapped people to bypass their limitations with the science of cybernetics has become a lifelong passion.

Dr. Scott-Morgan, who suffers from the same neurodegenerative disease as Professor Stephen Hawking, developed and implemented a number of systems, including a life-like avatar with which he could show emotions, a voice box equipped with recordings of his own voice, and eye-tracking technology, with which he could control computers.

As his body failed, these systems became an increasingly important lifeline and served as the primary way he could communicate and interact with the world.

“I wanted to show everyone what it means to be locked in your own body,” he said.

“It’s not just about MND. It’s about any disability, whether it’s from an accident, illness, genetics or just old age, even dementia. But ultimately it’s about every person on Earth being set free.”

“I was lucky to be a prototype and a neo-human, an early experiment on how humanity can make a huge leap into our future.”