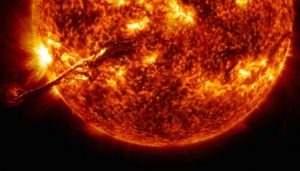 At the end of October, experts expect a very strong magnetic storm. They noted the fact that it will become the most powerful in recent years.

This year in October, the Earth will be hit by an incredibly strong magnetic storm. Experts are confident that its impact on the planet and people will continue for a week. Moreover, the strikes will be several times more powerful than during the storm, which was recorded at the end of September.

Scientists have provided data that a strong geostorm should be expected on October 21-23. In this case, the magnetosphere will remain excited for several more days, both before these dates and after them.

It is worth noting that experts believe that in the future, magnetic storms will happen much more often. The reason for this is that the Sun has passed into the 25th cycle and therefore its activity begins to gradually increase. The peak of solar activity can be expected in 2025.

Magnetic storms are considered dangerous enough for some people. Experts warn that heart attacks increase by about 20% during increased solar activity. Professor Viktor Martynyuk told that those people who have problems with the cardiovascular and immune systems need to be especially careful.

In order to minimize the dangerous effects of a magnetic storm on the human body, you need to adhere to a certain sleep schedule, eat healthy food and do not forget about moderate physical activity.

If there are any specific health problems, then during a magnetic storm it is imperative to have all the necessary medicines on hand. If the state of health deteriorates sharply, you must immediately seek help from specialists.