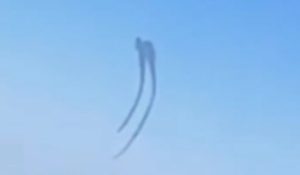 This was filmed some time in March 2019 with the uploader asking one question “Can someone tell me what this is?” Indeed, what could this be very close to this airplane?

A passenger boarding a flight from Phoenix to Portland reportedly shot a baffling scene. In the video we see two curious dark objects hovering next to the airliner.

It seems that objects have long tentacles and rotate slowly while the flight continues until the end of the video.

And unlike other UFO clips, this unique piece of video caused rumors that the anomaly was not an alien spacecraft but maybe some kind of unknown to science flying biological entities.

“Creatures in the sky’s – I completely agree! Not only are there unknown biological entities being discovered almost daily, but also spiritual entities are present as well!”, wrote one user.

“Not a plane, not a drone. And yes it’s possible something from another dimension slipped threw momentarily. Our reality is just that.. ours. There are others. And we really have no idea where or what we’re living in”, added another.

Whatever it is, remains a mystery.