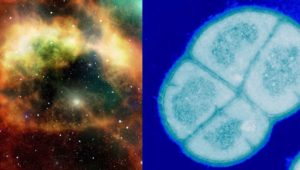 A person cannot stay in space for a long time, because health problems appear even if they are inside a spaceship. Scientists know so far only one organism that can survive without any protection in outer space, reports Science Alert.

Space is a place with destructive ultraviolet influence, vacuum, huge temperature fluctuations and microgravity. Only simple organisms can survive in it. For example, scientists have stated that the bacteria Deinococcus radiodurans have successfully existed in the new environment for a year.

Trials of Deinococcus radiodurans have been in progress for five years. In 2015, a team of scientists organized a Tanpopo mission outside Japan’s Kibo space module to test the survival of microorganisms. Everyone was surprised when the bacteria passed all the tests with dignity.

The cells were stripped of water, taken to the ISS and placed in an open platform, which was covered only by glass. The glass blocked ultraviolet light at wavelengths of 190 nanometers or less. This is tantamount to having an atmosphere on Mars, for example, which also absorbs radiation below 200 nanometers.

For a year, bacteria D. Radiodurans was not affected by radiation, extreme temperatures, or gravity. Today bacteria are already on Earth and are being actively studied by Australian, Japanese and German scientists.

Over the course of a year, strange bumps have appeared on the bacteria. Some repair processes also started, some of the mRNA proteins became more developed.

Previous studies have also indicated that it can survive much longer – at least three years.

“These investigations help us to understand the mechanisms and processes through which life can exist beyond Earth, expanding our knowledge on how to survive and adapt in the hostile environment of outer space,” said biochemist Tetyana Milojevic from the University of Vienna.

“The results suggest that survival of D. radiodurans in LEO (Low Earth Orbit) for a longer period is possible due to its efficient molecular response system and indicate that even longer, farther journeys are achievable for organisms with such capabilities.”