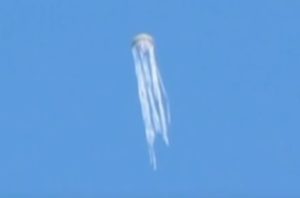 Strange footage from Brazil shows a mysterious unidentified flying object that bears a striking resemblance to a jellyfish.

Last month, a bizarre phenomenon was reported across the city of Sao Paolo, and a footage of the unusual incident came up online this past weekend.

The footage of the UFO sighting was posted on YouTube by the channel Focus dos Fluxos na Cidade. According to the clip’s description, the incident happened on Feb. 16 at around 8:45 am in Sao Paulo, Brazil.

The footage, which is less than two minutes long, showed a white object flying close to thin clouds in the sky.

Close-up shots of the object revealed that it had a dome-shaped body with tail-like features hanging from its sides.

After watching the video, Scott Waring of ET Data Base stated that the object was a type of UFO that looked like a jellyfish.

“In the video we see the tentacles, yet they don’t move,” he stated. “Had this been a balloon, the tentacles would be plastic and blowing to the opposite direction the wind is, however, the long objects just hang there. That means not a balloon.“

“This is the best recording of a jellyfish UFO in existence. This is incredible proof that not only are we being visited by aliens, but the tech they use mimics living creatures.”