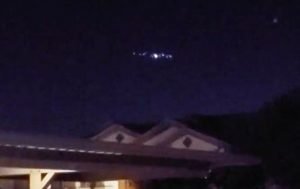 Reports of a huge UFO quietly hovering over a Californian city in the night sky have flooded the internet.

The footage first appeared on YouTube on December 3 of what seemed to be a lion of lights staying over Menifee in the same place.

“What in the f*** is that?” one of the witnesses asks in the clip. Are those drones, what is that thing int he middle then?

“They are too high to be drones. Dude, what is that? I need to see.”

Originally taken on October 19, the video surfaced online only recently. The uploader says that “more than 100 people”.

“At one point, the huge UFO was just hovering in the same spot for over five minutes before it speeds off into the night sky.”

A strange object appeared near the Sun: alien spaceship?