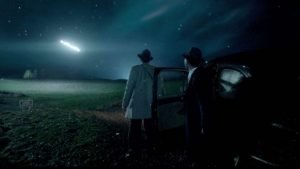 Perhaps one of the most famous unexplained phenomena in modern American history is the account of the Lubbock Lights, which took place from late August to early September of 1951. The Lubbock Lights were a series of spectacular nocturnal light formations that appeared in the sky above the city of Lubbock in northwestern Texas.

These lights were first reported to have been witnessed on August 25, 1951 by three Texas Tech University professors as they were standing in the backyard of one of the professors’ homes.

According to the professors’ report, a group of roughly 20 to 30 round-shaped lights flew overhead in a “V” or “U” shaped formation, silently passing over the yard at a high rate of speed.

The lights were as bright as stars, but appeared to be much larger in circumference than the average star that is visible at night. A similar flight occurred later that same night, and the professors subsequently reported witnessing a total of approximately twelve such flights over the next three weeks.

One of the most notable aspects of this series of sightings was the fact that the three witnesses were credentialed and generally regarded to be more reliable than the average UFO witness due to their educational background.

The professors–Dr. W.I. Robinson, a professor of Geology, Dr. A.G. Oberg, a professor of Chemical Engineering, and Dr. W.L. Ducker, head of the Petroleum Engineering Department at Texas Tech University (then called Texas Technical College)–later reported the sightings to the Lubbock Avalanche-Journal, a local newspaper. 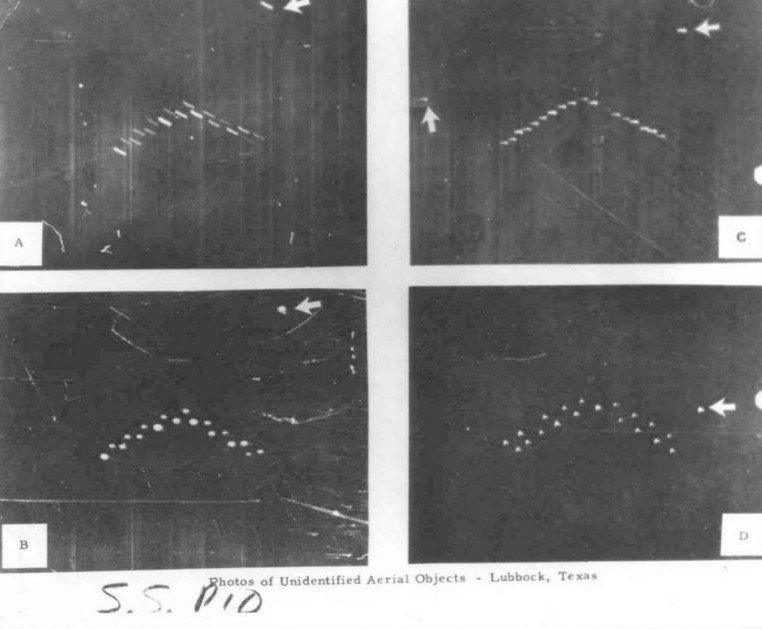 After the publication of the article, three local women also came forward and reported that they had also seen lights in the sky the same night that the professors mentioned in their account.

On August 30th, 1951, a Texas Tech freshman by the name of Carl Hart Jr. was looking out of his bedroom window when he observed the same phenomenon of the flashing lights.

He quickly ran and grabbed his parents’ 35mm Kodak camera and walked out to his backyard in hopes of capturing some footage of the flight. While he was not able to photograph the first series of lights that passed overhead, he did manage to capture two subsequent flights that took place while he was outside.

Hart took a total of five pictures and presented them to Jay Harris, the editor of the Lubbock Avalanche-Journal, in hopes of having them published. Harris reluctantly agreed, and the photos were soon afterwards reprinted in newspapers all across the nation, as well as in LIFE magazine.

As the popularity of the images began to increase, the Air Force began to take interest in the reports of the Lubbock Lights. In late September of 1951, physicists at Ohio’s Wright-Patterson Air Force Base extensively examined Hart’s photos and issued an official statement that the authenticity of the photos could neither be proven nor disproven. 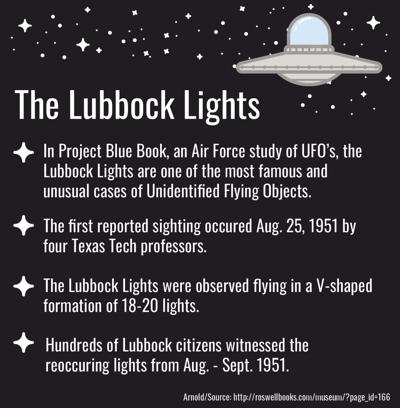 Ruppelt interviewed Hart, the three professors, and scores of other witnesses who claimed to have seen the lights. Ruppelt concluded that the observers had actually seen a flock of quail-sized birds known as “plovers” flying in a migratory pattern.

Since the city of Lubbock had recently installed new sodium-vapor street lights, Ruppelt claimed that the plovers were reflecting these lights in the night sky as they flew overhead.

One game warden interviewed by Ruppelt did not believe that the phenomena could have been caused by plovers due to the fact that plovers usually fly in groups much smaller than those reported by the witnesses, and at a much slower speed (roughly 50 mph).

Ruppelt later rejected his own hypothesis regarding the plovers in a book he published entitled “The Report on Unidentified Flying Objects”, but he offered no concrete explanations as to what the lights actually were.

He simply stated that he had received the answer from a scientist who had extensively researched the matter and identified it as a “commonplace” and “easily explainable natural phenomenon”. Unfortunately, Ruppelt chose not to completely divulge the answer, since doing so would jeopardize the scientist’s anonymity, which Ruppelt had promised to maintain.

The mystery of the Lubbock Lights has yet to be fully resolved. Even to this day, after years of intense scrutiny, Carl Hart Jr.’s now-iconic photos of the phenomena have not been rejected as counterfeit, but simply written off as “unexplained”.

If the lights were truly an “easily explainable natural phenomenon”, why hasn’t there been anyone else to come forward and offer a satisfactory explanation? Several witnesses of the incident believe to this day that Lubbock was indeed visited by UFOs, while others continue to write it off as a natural phenomenon. Perhaps we will never know the full truth, but it remains a fascinating piece of UFO history nonetheless.