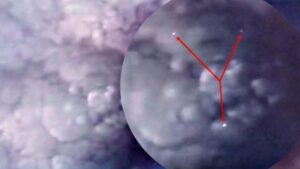 On January 21, 2021, during a live broadcast from cameras installed on board the ISS, a fleet of UFOs was recorded.

While watching a live broadcast from the ISS on TV, an eyewitness noticed several UFOs flying through the clouds and under the ISS. He grabbed his phone to record the remarkable event.

Then, all of a sudden, the live feed switched to another camera and remained off for a while, which often happens when UFOs come into view.

In the footage that the eyewitness managed to record, you can see at least three UFOs flying at great speed and making changes during the flight.