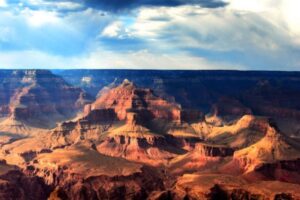 In 1909 a subterranean city which was built with the precision of the Great Pyramid was found by G.E. Kincaid near the Grand Canyon in Arizona.

It was big enough to accommodate 50,000 people and mummified bodies found on the site were of oriental or possibly Egyptian origin, according to the expedition leader Professor S. A. Jordan. Numerous artifacts were found, including copper implements as hard as steel.

The Smithsonian Institution in Washington DC has ensured these finds remain unknown to the public and no-one would have known about this discovery had it not been for two articles in a local newspaper, the Arizona Gazette, in April 5th, 1909 with the title “Explorations in the Grand Canyon”. 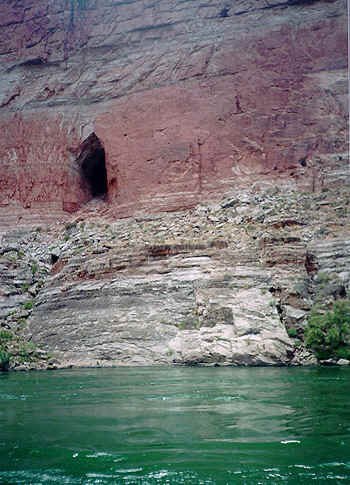 The Gazette claimed that the team had found a vast underground citadel within the Grand Canyon which was “not only the oldest archaeological discovery in the United States, but one of the most valuable in the world.”

The researcher and author, John Rhodes, claims to have located this site and he connects it with Sipapuni, the underground world from where the Hopi Indians claim to have originated. According to their legends, the Hopi once lived within the Earth and were fed and clothed by ‘ant people’, possibly the extraterrestrials known as the Greys. The Hopi refer to their ancestors as their ‘snake brothers’ and their most sacred of underground rituals is the snake dance.

Kinkaid’s narration of the discovery in the Gazette described how he made the discovery while traveling alone in a wooden boat down the Colorado River from Green River, Wyoming, to Yuma, looking for minerals. According to the article, about 42 miles up from the El Tovar Crystal canyon, (probably around Marble Canyon, in the area of the present-day Navajo Indian reservation), Kinkaid noticed “stains in the sedimentary formation about 2,000 feet above the river bed.”

He then, with great difficulty, made his way up the canyon wall to arrive at a small cave opening, which had steps leading down from it. Kinkaid then passed through the entrance, and at a cross chamber 100 feet from the entrance, he found a carved image of a cross-legged idol, which he thought resembled Buddha and was probably of Tibetan origin.

Several hundred feet along the 12-foot wide passageway he discovered a crypt containing mummies, one of which he stood up and photographed by flashlight.

There were numerous side passages, rooms, and various artifacts, including copper tools, urns, and cups of copper and gold, enameled and glazed pottery vessels, engraved yellow stones strewn all over the floors, and an unknown grey metal resembling platinum. He also found hieroglyphics, which he believed were of an “Egyptian or Oriental type.” 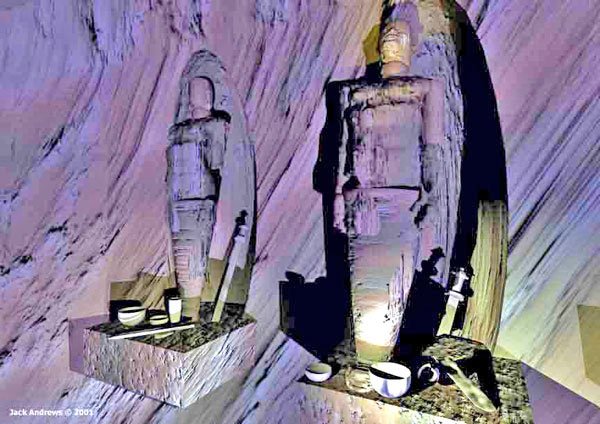 Kinkaid surmised that more than 50,000 people could have been comfortably accommodated within the caverns. The newspaper mentioned that some of the artifacts had been shipped off to Washington, D.C., and that the Smithsonian Institute, under the direction of Prof. S.A. Jordan, was carefully investigating the citadel.

The discoveries, they claimed, “almost conclusively prove that the race which inhabited this mysterious cavern was of oriental origin, possibly from Egypt, tracing back to Ramses.”

What is the truth behind this amazing story? Is there any other evidence apart from this isolated and anonymous newspaper article? If fact, there is a previous article in the same newspaper from March 12, 1909, also relating to G.E. Kinkaid.

The article gives a short description of Kinkaid’s trip down Colorado and mentions “some interesting archaeological discoveries” being made, but nothing is indicated of the staggering nature of these finds. For some reason, the Arizona Gazette never followed up the story.

After May 1909 there is complete silence on the subject until the article was rediscovered by ancient mysteries writer David Hatcher Childress and published in the conspiracy magazine Nexus in 1993.

It subsequently found its way onto the Internet, and the Egyptians in the Grand Canyon story has now been used by hundreds of Websites. Most of these are merely reprints of Childress’ Nexus article, and all derive from the original newspaper story. In fact, since 1909, no further evidence at all for truth of the claims has been added to the original source.

In January 2000, researchers into the mystery contacted the Smithsonian Institution on the subject. They were told that over the years the Institution had received many inquiries about the 1909 newspaper article, but that its Department of Anthropology could find no mention in its files of a Professor Jordan, Kinkaid, or a lost Egyptian civilization in Arizona.

Researchers did turn up mention of an archaeologist called Prof. S.A. Jordon, spelled with an o, not an a, but apparently he was European, not American. However, for some researchers this is proof that the entire discovery has been covered up.

They point to the many unexplored caves, tunnels, and holes in the canyon and the fact that much of the area around where Kinkaid allegedly made his discovery is now government property and closed to the public. 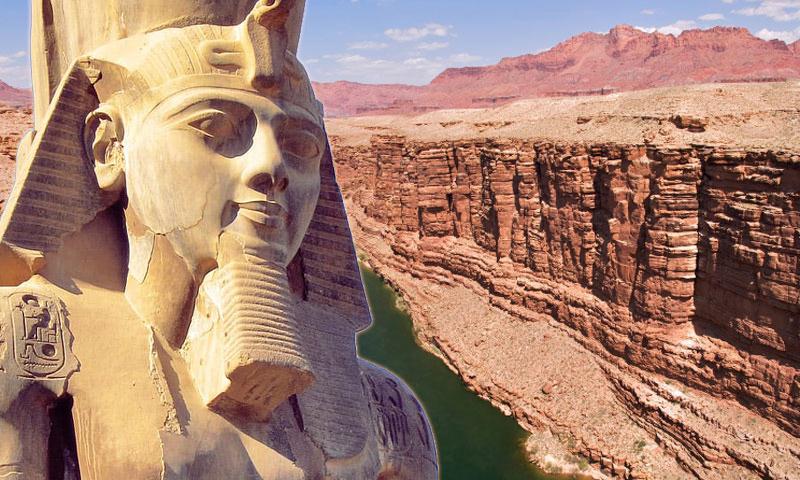 This is certainly true of the 400 foot deep Stanton’s Cave, which, when excavated, was found to contain thousands of ancient Indian artifacts, and the remains of 10,000-year-old giant California Condors. It is a significant archaeological and palaeontological site, and is now listed on the National Register of Historic Places.

This cave, along with others in the area, is now sealed of from the public with a huge steel gate. The sinister reason behind this? To protect the colony of Townsend’s big-eared bats living in the cave from being disturbed by visitors.

Another curious feature of the Grand Canyon-which appears to link it to the 1909 newspaper story-is the wide variety of oriental and Egyptian names given to many of its peaks and buttes, particularly in the area of Kinkaid’s strange caverns.

Around Ninety-four Mile Creek and Trinity Creek there are names such as Isis Temple, Tower of Set, Tower of Ra, Horus Temple, Osiris Temple, while in the Haunted Canyon area there are the Cheops Pyramid, the Buddha Cloister, Buddha Temple, Manu Temple, and Shiva Temple. Perhaps the mysterious origin of these names gives a clue to the location of Kinkaid’s hidden treasure?

Unfortunately, the explanation for these names is far more prosaic. It comes in the form of Clarence E. Dutton, Captain of Ordnance in the U.S. Army, whose most important work, The Tertiary History of the Grand Canyon District, appeared in 1882.

It was Dutton who, noting the similarities between the Grand Canyon peaks and some of the great architectural works of mankind, gave the Grand Canyon most of its exotic names. The remainder were named by Francois Matthes, a government cartographer, who in the spring of 1902 undertook the topographic mapping of the Grand Canyon for the U. S. Geological Survey. 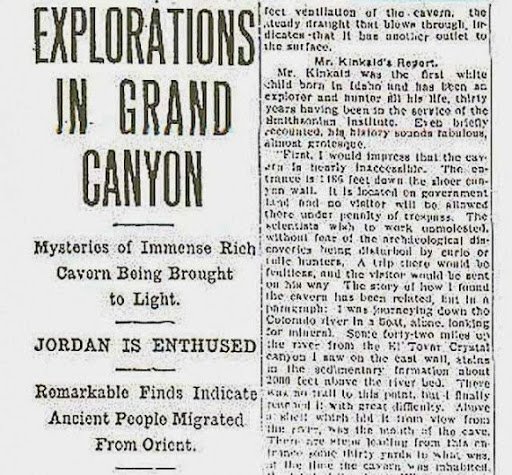 There is no mystery about this; most decent histories of the Grand Canyon (Frommer’s Grand Canyon National Park and Stephen J. Pyne’s How the Canyon Became Grand, for example) give these facts. Indeed, it is more than possible that the Egyptian and Indian place names of the Grand Canyon provided part of the inspiration for the Gazette article.

But is the article anything other than a simple newspaper hoax, akin to that published in The Dallas Morning News, of April 19, 1897, telling of a UFO crash in Aurora, Texas? Many details of the 1909 article do suggest this.

First of all, nobody has ever seen the photographs Kinkaid is alleged to have taken in the caverns or the artifacts he apparently retrieved. Surely, in more than 90 years someone would have seen them. Another problem is the lack of documentary evidence to back up the existence of either G.E. Kinkaid or Prof. S.A. Jordan.

In addition, in the May 1909 article the Gazette refers to the Smithsonian as an Institute instead of an Institution (many Websites using the story have copied this error).

It is surely fair to suggest that anyone employed by the Smithsonian would know the difference. A further error in the article is the statement that Kinkaid was “the first white child born in Idaho.” In fact, this was Eliza Spalding, born at Lapwai on November 5, 1837, to Henry and Eliza Spalding.

According to conspiracy theorists, the Smithsonian Institute went so far as to destroy artifacts to maintain this historical viewpoint.

Espousers of this theory mention man-made mounds with plaster walls strewn across the American Midwest and a series of fire-hewn coffins found in Alabama in 1892 that were turned over the Smithsonian Institute, only to be lost in the years following. Kincaid and Jordan returned without artifacts or pictures of the findings, leaving the Arizona Gazette article as the sole evidence of the expedition.

Sources: Hidden History: “Lost Civilizations, Secret Knowlodge, and Ancient Mysteries” by Brian Haughton; The Biggest Secret: “The Book that Will Change The World” by David Icke