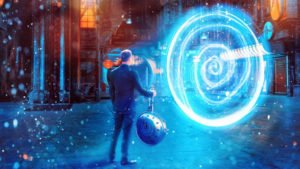 A lot of people have a hard time trusting lawyers as it is, but what about one who claims he was part of a secret government time travel program when he was a kid?

Since 2004, Seattle attorney Andrew Basiago has been publicly claiming that from the time he was 7 to when he was 12, he participated in “Project Pegasus,” a secret U.S. government program that he says worked on teleportation and time travel under the Defense Advanced Research Projects Agency, reports “The Huffington Post”.

“They trained children along with adults so they could test the mental and physical effects of time travel on kids,” Basiago told The Huffington Post. “Also, children had an advantage over adults in terms of adapting to the strains of moving between past, present and future.”

Nevertheless, Basiago’s claim gets support from Alfred Webre, a lawyer specializing in “exopolitics,” or the political implications surrounding an extraterrestrial presence on Earth. Webre said teleportation and time travel have been around for 40 years, but are hoarded by the Defense Department instead of being used to transfer goods and services faraway distances.

“It’s an inexpensive, environmentally friendly means of transportation,” Webre told The Huffington Post. “The Defense Department has had it for 40 years and [former Defense Secretary Donald] Rumsfeld used it to transport troops to battle.”

Basiago said he experienced eight different time travel technologies during his stint in the program. Mostly, he said, his travel involved a teleporter based on technical papers supposedly found in pioneering mechanical engineer Nikola Tesla’s New York City apartment after his death in January 1943.

“The machine consisted of two gray elliptical booms about eight feet tall, separated by about 10 feet, between which a shimmering curtain of what Tesla called ‘radiant energy’ was broadcast,” Basiago said. “Radiant energy is a form of energy that Tesla discovered that is latent and pervasive in the universe and has among its properties the capacity to bend time-space.”

Basiago said project participants would jump through this field of radiant energy into a vortal tunnel and “when the tunnel closed, we found ourselves at our destination.”

“One felt either as if one was moving at a great rate of speed or moving not at all, as the universe was wrapped around one’s location,” Basiago said.

Basiago claimed he can be seen in a photograph of Abraham Lincoln at Gettysburg in 1863, which he said he visited in 1972 via a plasma confinement chamber located in East Hanover, N.J.

“I had been dressed in period clothing, as a Union bugle boy,” he said. “I attracted so much attention at the Lincoln speech site at Gettysburg — wearing over-sized men’s street shoes — that I left the area around the dais and walked about 100 paces over to where I was photographed in the Josephine Cogg image of Lincoln at Gettysburg.” (The boy on the left in the photo below). 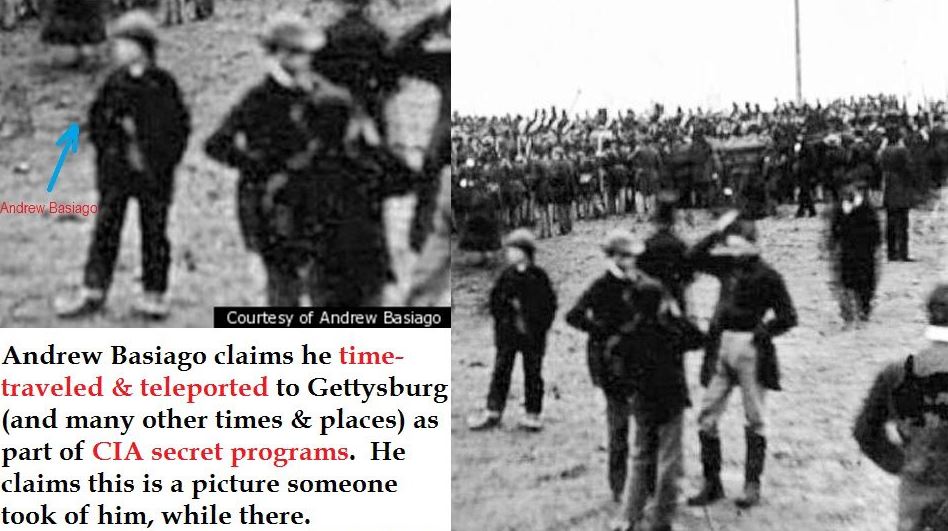 In addition, Basiago said he traveled to Ford’s Theatre the night of Lincoln’s assassination on five or six occasions. “I did not, however, witness the assassination,” he said. “Once, I was on the theater level when he was shot and I heard the shot followed by a great commotion that arose from the crowd. It was terrible to hear.”

Basiago said each of his visits to the past was different, “like they were sending us to slightly different alternative realities on adjacent timelines. As these visits began to accumulate, I twice ran into myself during two different visits.”

Being sent back in time to the same place and moment, but from different starting points in the present, allowed two of himselves to be in Ford’s Theatre at the same time in 1865.

“After the first of these two encounters with myself occurred, I was concerned that my cover might be blown,” he recalled. “Unlike the jump to Gettysburg, in which I was clutching a letter to Navy Secretary Gideon Welles to offer me aid and assistance in the event I was arrested, I didn’t have any explanatory materials when I was sent to Ford’s Theatre.”

And how did these alleged time travelers return to the present day or their point of origin? According to Basiago, some sort of holographic technology allowed them to travel both physically and virtually.

“If we were in the hologram for 15 minutes or fewer,” he explained, “the hologram would collapse, and after about 60 seconds of standing in a field of super-charged particles … we would find ourselves back on the stage … in the present.”

Basiago said the technology should only be used for real-time teleportation, not time travel, because, “It would be chaos.”

Basiago and Webre held a seminar in Vancouver, B.C., focusing on the need to disclose, deploy and declassify the technology, as well as the public policy decisions that would be needed to use it.

Webre, for one, said he wants teleports installed in every major city where people and products would be transported through the time-space continuum. “This would free up a lot of urban space that is currently being used by train yards or airports,” Webre said.

Of course, there are risks. Basiago remembered feeling extreme turbulence while going through the vortal time tunnel. Webre said one tragedy occurred in the early days of the technology in which a child in Project Pegasus arrived a few seconds before his legs.

“He was writhing in pain with just stumps where his legs had been,” Webre said.

Webre said problems like that have since been solved. Still, he said teleportation needs strict legal controls to prevent it being used for “for political control, economic control or illegal surveillance.”

All of this is fascinating stuff — if true. But experts who include retired Army Col. John Alexander, former director for the Advanced System Concepts Office, U.S. Army Laboratory Command, are, to put it mildly, skeptical.

“If this could be done, if anyone could go even one second into the future, we’d own the world,” Alexander told The Huffington Post. “There are computer programs on Wall Street that are hundredths of a second faster and provide a tremendous advantage.”

Basiago said that as many as 100 people worked on Project Pegasus. Alexander said he doubts that many people could keep the secret for 40 minutes, much less 40 years.

“There’s a saying in Washington: If two people know something, it’s not a secret,” said Alexander, author of “UFOs: Myths, Conspiracies, and Realities.” “If this was used by the Department of Defense, how did we miss the weapons of mass destruction in Iraq or the fall of the Shah of Iran?”

Basiago said Alexander’s rhetorical questions can be explained by the paradoxes of the time-space continuum.

“I only know about how the time travel technology was used during my involvement with Project Pegasus, so this is only speculation,” he said. “But it’s possible that ‘forward intelligence’ showed [Iraq leader Saddam] Hussein using the weapons of mass destruction, but our military went in and toppled him before he could use them.”