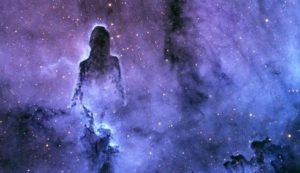 American amateur astronomer Kurt Morgan viewed images taken a few years ago by the famous Hubble telescope on the official website of the US National Space Agency, and unexpectedly discovered something amazing on one of the frames.

The automatic orbital observatory captured the Elephant Trunk Nebula, also known under the codename VDB 142, in the constellation Cepheus.

“Elephant trunk” is located about 3000 light years of our planet, stretching in space for almost 20 light years.

Morgan drew attention to the fact that in one of the images the nebula, which looks like a giant clot of dust and hydrogen, looks suspiciously like a dark humanoid figure.

An astronomer – seriously or not – called it “the silhouette of God” and spoke about his discovery to Internet users.

It’s hard to tell if a man really believes that “Hubble” has catch something divine in the depths of space.

By the way, there are at least a couple of ufological cults in the world, whose members are convinced that in this way one can obtain evidence of the existence of the Creator: peering with the help of powerful telescopes in the far corners of the universe.