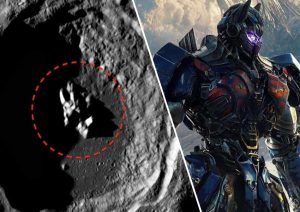 A very unusual object was spotted in a crater in a new image of the surface of the Moon from NASA. The picture was taken on January 2, 2019.

A completely incomprehensible object is found between the crater Von Karman and the craters Davvison in a small round crater without a name. The object seems so artificial that he will immediately remind many people of a robot from Transformers movie.

The object is very bright. It looks like it’s really made of metal.

It also casts a shadow, that is, it really stands on the bottom of the crater and is not a game of light refraction.

Scott C Waring, a popular extraterrestrial researcher has spotted a bizarre structure on the moon that has striking similarities to the alien spaceships we have seen in Hollywood movies.

“I found this structure in the center of a crater on Earth’s moon. The structure closely resembles a ship from the Transformers movie. The craft is triangle in shape, but with a lot of odd bulges. The object is very shiny, more so than anything in its surrounding area, which tells me it’s metallic. Also, there is a shadow going across its front… it is not broken, its front is lower so there is a shadow making that part of the alien ship darker,” wrote Waring on his website.

What it is? Some building, extraterrestrials spaceship, or something else?

The original in very high resolution can be seen here.