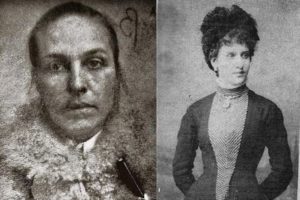 On February 3rd, 1903 Amelia Sach, aged 36 and Annie Walters aged 54, known as the Finchley baby farm killers, became the first woman to be hanged at Holloway Prison, in London, a task undertaken by executioner Henry Pierrepoint.

Baby Farming was a term used in Victorian Britain, to mean the taking in of an illegitimate infant or child for payment with the view of ‘adopting the child out’ or caring for the child for an agreed weekly fee.

Illegitimacy in Victorian Britain was a huge stigma, not only for the child but also for the child’s mother, who would find herself shunned by society. The stigma of being an unmarried mother could cause her to lose employment and even make it difficult for her to gain further employment. With no welfare system, other than the local work house, unmarried mothers were faced with a difficult decision.

Thus came the choice of the feared Victorian work house, or give up her child. Baby farming soon became a profitable business for those less scrupulous members of society. A high infant mortality rate was part of daily life during the Victorian Era, so the death of one or two illegitimate children was unlikely to raise many eyebrows.

Many baby farmers would take in infants, leaving them to die of starvation or neglect. Other baby farmers found it far more profitable to dispose of the infants as soon as possible. Walters’ background is unknown, but she had been married. She seems to have had a drinking problem and she would periodically advertise herself as a sick nurse. On her arrest she was determined to be “feeble”, that is to say, feeble-minded.

Whilst little is known about Annie Walters, Sach’s background is well-documented. Amelia Sach was baptised Frances Amelia Thorne in Hampreston, Dorset, on 5 May 1867. She was the fourth child of ten and had three sisters.

She married a builder called Jeffrey Sach in 1896. Sach was active long before she engaged Walters. By 1902 she was working from ‘Claymore House’, a semi-detached, red-brick villa in East Finchley, North London. Sach was herself a mother, the England and Wales census of 1901 shows that a child was born to her in Clapham. She lied about her age – she was 32, not 29.

There is a possibility that the pair may have been involved in an earlier murder that resulted in another woman being executed. In 1899, Louise Masset was tried for the murder of her young son Manfred, whose body was found in the ladies’ lavatory at Dalston Junction railway station.

Circumstantial evidence suggested that Louise was the murderer, and the killing was to be rid of a supposed encumbrance due to her wanting to marry a man named Lucas. However, in her claims of innocence, Louise said she had taken Manfred out of the care of one woman to give him to two ladies she met who had an establishment for the care of growing children.

The police claimed they made some effort in looking for the two women, but the extent of their investigation is unknown. In any event, Louise Masset was tried and convicted of the murder and, despite a petition for mercy, was executed on 9 January 1900.

By 1902 Amelia was running a ‘lying in’ house at Claymore House. A place where unmarried women could have their babies and for a fee leave them behind to be adopted or fostered out. The charge for these services was usually around £25 – £30, a vast amount when you consider a labourer at the time might be paid 3s 9d a week.

Many of these women left their babies behind dreaming of the loving families that would adopt and care for them, giving them everything their mother could not. Unfortunately, this was far from the truth.

Once an infant had been left in the care of Amelia Sach, Annie Walters would be called upon to collect it. She would then murder the hapless infant by means of administering Chlorodyne, a morphine-based drug that causes asphyxia in babies or if the drug was unsuccessful, smothering the child. Their bodies were then dumped in the Thames or left in rubbish heaps.

It is thought that Amelia and Annie may have disposed of up to 20 infants in this manner. However, their enterprise was soon to come to an end. One evening Annie Walters decided to take one of the babies home with her to her rented room. She told her landlord, a police officer, that she was looking after the little girl while her parents were away on holiday.

Annie was arrested and charged with the murder of a male infant by the name of Galley. Soon more bodies where discovered and with the information volunteered by Annie, the police arrived on the doorstep of Amelia Sach.

A search of Amelia’s house turned up several items of baby clothing, some of which were identified by mourning mothers whose children had vanished without a trace whilst in the care of Amelia. The police now finally had enough evidence to arrest and charge Amelia with murder too.

Their trial took place on the 15th and 16th of January 1903 before Mr Justice Darling. The jury took just 40 minutes to find them both guilty and they were subsequently taken to Holloway prison to await execution. Executioner Henry Pierrepoint noted in his diary. “These two women are baby farmers of the worst kind and they are both repulsive in type.”

Amelia Sach had to be carried to the scaffold, while Annie Walters remained quite calm, is said that she called out, “Goodbye Sach” when hooded on the trapdoor. It was to be the last double female hanging in Britain.

The bodies of Amelia and Annie were buried in unmarked graves inside the walls of Holloway prison. In 1971 during an extension work at the prison their bodies where exhumed and reburied in plot 117 in Brookwood Cemetery along with the bodies of two other women who were executed at Holloway, Styllou Christofi and Edith Thompson.