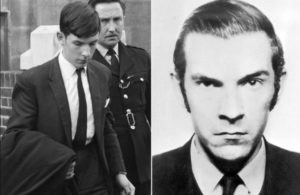 Graham Young was born in Neasden in Middlesex on 7 September 1947. His mother died a few months after his birth. He was sent by his father to live with an uncle and aunt, while his older sister went to live with his grandparents. A few years later he was separated from his aunt and uncle in order to live with his father and new stepmother.

He was fascinated from an early age by poisons and their effects. In 1959 Young passed his eleven-plus, and went to grammar school.

In 1961, he started to test poisons (including antimony) on his family, enough to make them violently ill. Beginning in February, his stepmother, 37-year-old Molly Young had suffered vomiting, diarrhea and excruciating stomach pain, which she initially dismissed as bilious attacks.

Before long his father Fred, 44, was also suffering, with similar stomach cramps debilitating him for days at a time. Then Young’s sister was violently ill on a couple of occasions that summer. Shortly afterwards, Young himself was violently sick at home.

It even seemed as if the mystery bug had spread beyond their household: a couple of Young’s school friends had also been off school ill a couple of times with similar painful symptoms.

In November 1961, Winifred Young was served a cup of tea by her brother one morning, but found its taste so sour she took only one mouthful before she threw it away. While on the train to work an hour later, she began to hallucinate, had to be helped out of the station and was eventually taken to hospital, where doctors came to the conclusion that she had somehow been exposed to the poisonous Atropa belladonna.

Fred Young confronted his son, but Graham blamed Winifred, whom he claimed had been using the family’s teacups to mix shampoo. Unconvinced, Fred searched Graham’s room, but found nothing incriminating. Nevertheless, he warned his son to be more careful in future when “messing about with those bloody chemicals”.

On Easter Saturday, 21 April 1962, Young’s stepmother, Molly, died from poisoning and shortly afterwards his father became seriously ill and was taken to hospital where he was told that he was suffering from antimony poisoning and one more dose would have killed him.

Young’s aunt, who knew of his fascination with chemistry and poisons, became suspicious, as did his science teacher (Mr Hughes) who discovered several bottles of poison in Young’s desk and spoke to the school’s headmaster about his concerns. Young was sent to a psychiatrist, who recommended contacting the police.

Young was arrested on 23 May 1962 and confessed to the attempted murders of his father, sister, and friend. The remains of his stepmother could not be analysed because she had been cremated which was suggested by Graham, and at the time her death was not treated as suspicious but rather as the result of complications from injuries sustained in a traffic accident.

Young was detained under the Mental Health Act in Broadmoor Hospital, an institution for patients with mental disorders who have committed offences, after having been assessed by two psychiatrists prior to his trial and diagnosed as suffering from a personality disorder, and also schizophrenia (classed under the law then as psychopathic disorder as it was linked to abnormal violence). He was Broadmoor’s youngest inmate since 1885. 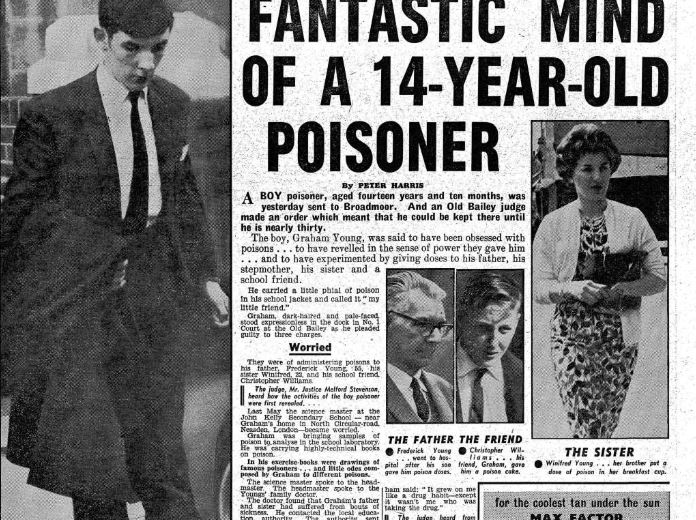 His detention was subject to special restriction meaning that subsequent discharge, leave of absence etc. would have to be approved by the Home Secretary. The Hospital Order initially stipulated that he should be detained for at least 15 years. The Secretary of State later noted that the index offences, for someone found sane, carried a sentence of no more than seven or eight years.

In June 1970, after nearly eight years in Broadmoor, Edgar Udwin, the prison psychiatrist, wrote to the Home Secretary to recommend his release, announcing that Young “is no longer obsessed with poisons, violence and mischief.”

However, in the hospital Young had studied medical texts, improving his knowledge of poisons, and continued experiments using inmates and staff (one of whom died). It was rumoured that his knowledge of poisons was such that he could even extract cyanide from laurel bush leaves on the mental hospital grounds and that he used this cyanide to murder fellow inmate John Berridge.

After release from hospital in February 1971, he began work as a quartermaster at John Hadland Laboratories in Bovingdon, Hertfordshire, near his sister’s home in Hemel Hempstead. The company manufactured thallium bromide-iodide infrared lenses, which were used in military equipment.

However, no thallium was stored on site, and Young obtained his supplies of the poison from a London chemist. His employers received references as part of Young’s rehabilitation from Broadmoor, but were not informed of his past as a convicted poisoner. Young’s probation officer never visited Young’s home or place of work.

Soon after he began work, his foreman, Bob Egle, grew ill and died. Young had been making tea laced with poisons for his colleagues. A sickness swept through his workplace and, mistaken for a virus, was nicknamed the Bovingdon Bug. These cases of nausea and illness, sometimes severe enough to require hospitalisation, were later attributed to Young and his tea.

Young poisoned about seven people during the next few months, none fatally. Egle’s successor sickened soon after starting work there, but decided to quit. A few months after Egle’s death, another of Young’s workmates, Fred Biggs, grew ill and was admitted to London National Hospital for Nervous Diseases (now part of the National Hospital for Neurology and Neurosurgery). It was too late and after suffering agony for several weeks, he became Young’s fourth and final victim. 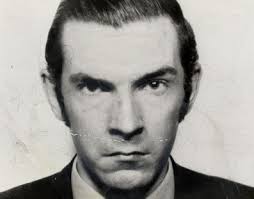 At this point, it was evident that an investigation was necessary. Young asked the company doctor if the investigators had considered thallium poisoning. He also told a colleague that his hobby was the study of toxic chemicals. Young’s colleague went to the police, who uncovered Young’s criminal record.

Young was arrested in Sheerness, Kent, on 21 November 1971. Police found thallium in his pocket and antimony, thallium and aconitine in his home. They also discovered a detailed diary that Young had kept, noting the doses he had administered, their effects, and whether he was going to allow each person to live or die.

At his trial at St Albans Crown Court, which started on 19 June 1972 and lasted for ten days, Young pleaded not guilty, and claimed the diary was a fantasy for a novel. Young was convicted and sentenced to life in prison. He was dubbed “The Teacup Poisoner”.

While in prison, he befriended fellow serial killer Moors murderer Ian Brady, with whom he shared a fascination with Nazi Germany. In his book, The Gates of Janus (2001) published by Feral House, Brady wrote that “it was hard not to have empathy for Graham Young”. The reformed criminal Roy Shaw, in his autobiography Pretty Boy (2003), recounts his friendship with Young.

Young died in his cell at Parkhurst prison on the evening of 1 August 1990, one month before his 43rd birthday. The cause of death was listed as myocardial infarction at an inquest, after a postmortem.