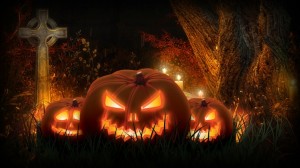 If you considered the actual only real things killing people on Halloween night were needle filled apples and chocolates, you better think again. In fact, nobody has ever been killed by such a thing in the history of man or Halloween.

While most cases of needles in the candy have been proven complete hoax, the phenomena has occured before but only resulted in minor injury. But what fun is that? Let’s take a look at some true Halloween horror stories where the victims weren’t so lucky.

Hyun Jong “Cindy” Song was a 21-year-old South Korean student attending Pennsylvania State University. In 2001, she dressed up in a bunny costume and attended a Halloween party at a nightclub in State College. After leaving the club, Cindy spent the next few hours hanging out with her friends before she was dropped off at her apartment at 4:00 AM. This was the last anyone ever saw of her. After Cindy was reported missing, a search was conducted of her apartment. There was no sign of any struggle, but many of her belongings, including the false eyelashes from her costume, were there, indicating that she had gone inside after being dropped off. But what happened to her afterward?

Shortly thereafter, a witness reported seeing a woman resembling Cindy in the Chinatown district of Philadelphia. This woman was inside a vehicle with an unidentified male and crying out for help. A bizarre lead came about in 2003 when a Luzerne County man named Hugo Marcus Selenski was arrested after the remains of five people were found buried in his backyard.

Even though none of these remains belonged to Cindy, an informant told police that Selenski and an accomplice named Michael Jason Kerkowski Jr. had abducted her. After Cindy was raped and murdered, the two men allegedly buried her body at another location. Kerkowski’s remains were found in Selenski’s backyard, and the informant claimed Kerkowski was murdered for keeping Cindy’s bunny ears as a souvenir. Thus far, no evidence was found to tie Selenski to Cindy’s disappearance, but in January 2014, the burned remains of a dozen more people were found buried on his property. It remains to be seen if any of them will be identified as Cindy Song.

Bodies of suicide victims have been mistaken for Halloween decorations

On 26 October 2005, the corpse of a 42-year-old woman was left suspended in public view for hours in Frederica, Delaware, because her lifeless body was assumed to be yet another Halloween display. The unnamed woman hung herself from a tree located across a moderately busy road from some homes. Her body, suspended about 15 feet above the ground, could easily be seen from passing vehicles.

State police spokesman Cpl. Jeff Oldham and neighbors said people noticed the body around 7:30 that morning but dismissed it as a holiday prank. Authorities arrived at the scene at 11:00 to begin the process of examining the scene and removing the body. The deceased lived about a quarter-mile from where her body was discovered.

Similarly, in mid-October 2009 the decomposing body of a 75-year-old suicide victim sat undisturbed on the balcony of the deceased’s home in Marina del Rey, California, for several days because neighbors assumed it was merely part of a Halloween display: Mostafa Mahmoud Zayed had apparently been dead [for three days] with a single gunshot wound to one eye. He was slumped over a chair on the third-floor balcony of his apartment on Bora Bora Way, said cameraman Austin Raishbrook, who was on the scene when authorities were alerted to the body.

Neighbors told Raishbrook that they noticed the body [three days earlier] “but didn’t bother calling authorities because it looked like a Halloween dummy,” he said.

“The body was in plain view of the entire apartment complex [and] they all didn’t do anything,” Raishbrook said. “It’s very strange. It did look unreal, to be honest.”

An investigator with the Los Angeles County Sheriff’s Department said the case is an “apparent suicide,” and declined to comment further. These grisly accounts of suicides being mistaken for Halloween tomfoolery is the reverse of what we’ve previously seen: deliberate attempts at presenting spooktacular visual effects resulting in actual, accidental demises. All too often, young persons called upon to stage fake hanging scenes as part of scary tableaux have fatally miscalculated, thereby ending their lives.

Tales of black-hearted madmen doling out poisoned Halloween candy to unsuspecting little tykes have been around for decades — they were part of my Halloween Trick or Treat! experience nearly forty years ago. And every year sees the same flurry of activity in response to such rumors: radio, TV and newspapers issue dark warnings about tampered candy and suggest taking the little ones to parties instead of collecting goodies door-to-door. Even Ann Landers published a column in 1995 warning us against the mad poisoner, saying, “In recent years, there have been reports of people with twisted minds putting razor blades and poison in taffy apples and Halloween candy.”

It’s a sadness that a holiday so thoroughly and greedily enjoyed by kids is being sanitized out of existence in the name of safety. Sadder still is there appears to be little reason for it.

Though I’ve yet to find evidence of a genuine Halloween poisoning, I have uncovered a few isolated incidents initially reported as random poisonings that, upon further investigation, turned out to be something else.

Let’s set the criteria for what constitutes a Halloween poisoning and then examine the famous and not-so-famous cases often pointed to as examples of this horror: To qualify as a Halloween poisoning, poisoned candy has to be handed out on a random basis to children as part of the trick-or-treating ritual inherent to Halloween. The act cannot be targeted to any one specific child. By far the most famous case of Halloween candy poisoning was the murder of eight-year-old Timothy Marc O’Bryan at the hands of his father, Ronald Clark O’Bryan, in Houston, Texas. The child died at 10 p.m. on 31 October 1974, as a result of eating cyanide-laced Pixie Stix acquired while trick-or-treating.

To make his act appear more like the work of a random madman, O’Bryan also gave poisoned Pixie Stix to his daughter and three other children. By a kind stroke of fate, none of the other children ate the candy.

The prosecution proved the father had purchased cyanide and had (along with a neighbor) accompanied the group of children on their door-to-door mission. None of the places visited that night were giving out Pixie Stix. Young Mark’s life was insured for a large sum of money, and collecting on this policy has always been pointed to as the motive behind this murder.

Though the case was circumstantial (no one saw the father poison the candy or slip the Pixie Stix into the boy’s bag), Ronald O’Bryan was convicted of the murder in May 1975. He received the death sentence and was executed by lethal injection on 31 March 1984 (not on the poetically-just 31 October as is often recounted in off-the-cuff retellings of the case).

The O’Bryan murder was an attempt to use a well-known urban legend to cover up the premeditated murder of one particular child. (Note that for this explanation of the boy’s murder to have been believed, the legend had to have been in wide circulation by 1974.) Though cold-blooded and horrible to contemplate, this crime still does not qualify as a genuine Halloween poisoning because there was nothing random about Timothy O’Bryan’s death. (The specter of the mad poisoner from the 1982 Tylenol murders was similarly employed by various murderers attempting to cover their tracks.)

Pins, needles, and razor blades have been found in trick-or-treaters’ loot

Halloween poisonings, many cases of tampered trick-or-treat loot involving the insertion of pins, needles, or razor blades have been documented.

To my mind, these cases constitute a different class of tampering than poisoning for a couple of reasons. First, the expected level of harm is severely reduced: poison is an attempt to kill; a pin in an apple is an attempt to frighten or injure. Professor Joel Best reported that he’s been able to track about eighty cases of sharp objects in food incidents since 1959, and almost all were hoaxes. Only about ten culminated in even minor injury, and in the worst case, a woman required a few stitches. Compared to “eat something and die,” a couple of stitches barely registers on the scale.

Second, the motivation for “pins and needles” tampering is different. As I said before, poison is an attempt to kill, but hiding a needle in an apple is almost always a prank, not a serious attempt to cause harm. (In those instances where such an insertion could be traced back to a specific person, it was almost always some kid intent on freaking out either his little brother or his parents or getting the community in an uproar as his version of a cute Halloween “trick”).

Pranking (especially when it’s a scary or slightly mean one) is part of Halloween, and the various kids or young adults who’ve tampered with treats most likely never fully considered the potential consequences of the joke prior to embarking on it. (When presented with a matchless opportunity to throw a scare into a pesky kid brother, who stops to think that Junior might get hurt?)

An incident that broke with this expected pattern occurred in Minneapolis in 2000, when 49-year-old James Joseph Smith was charged with one count of adulterating a substance with intent to cause death, harm or illness after it was determined he’d put needles in Snickers bars and handed them out to children on Halloween. A 14-year-old boy was pricked by a needle hidden in a bar he’d bitten into, but no one required medical attention.