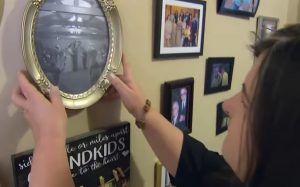 56-year-old Kim Denikola, who lives in the US city of Baton Rouge, Louisiana, surprised doctors with her unusual condition.

Doctors diagnosed the woman with transient global amnesia, but called the case truly unique. The fact is that such a syndrome is characterized by a loss of memory for several hours, less often for a day, but our heroine has not remembered for almost half a year what has happened to her over the past 40 years.

In October of last year, Denikola left the church and unexpectedly felt a strong headache, as well as double vision. She called her husband and informed him of her ailment. The husband advised Kim to immediately go to the hospital, but the woman stopped responding.

Soon, other citizens found her unconscious in a parking lot near the church and took her to the hospital. When our heroine came to her senses, a very unusual dialogue with the nurse was waiting for her.

The patient was asked what year it was, and Denikola said with confidence that the 1980th. When the nurse asked who the current US president was, she received the answer: Jimmy Carter. Then suddenly an unknown person came into the room, who rushed to our heroine and took her hand.

There were tears in his eyes and surprised Kim quickly realized that something was wrong. She did not even suspect that this elderly man was her husband, with whom she had lived for the past 20 years.

The American woman still does not remember how she married this man, whom she considered at the hospital much older than herself, how she bore him two sons and how she became the grandmother of three grandchildren.

The fact is that the consciousness of a woman has returned to the state when she was only 17 years old, and she absolutely does not remember her subsequent adult life.

Beginning on that fateful day, when Kim fainted in the parking lot, the doctors performed countless tests, scanning her brain up and down. But they could not determine what caused such a severe memory loss. According to the doctors, Denikola did not have a stroke or any other brain damage that could lead to such consequences.

She is re-learning to use a computer, tablet and other electronics, marveling that technical progress has managed to step so far. In addition, the woman was unpleasantly surprised by how transformed American society and how political differences split the country in two.

For Denikola, all of this was equivalent to an instantaneous movement of 40 years into the future — true, her body, too, was sharply aged. The woman also had to relive the bitterness of the loss of her parents and brother.

Despite this, she is surrounded by people who love her, and every day Kim, in her own words, it becomes easier to live the life that she had once lived, but which she somehow forgot.