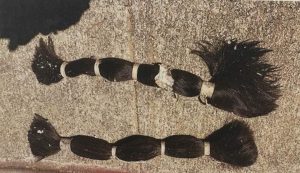 Residents of the American Santa Barbara in California have recently faced a strange mystery. They began to detect on the local roads incomprehensible bundles of dark hair: either human, or horse.

Despite the fact that the exact number of these beams is unknown, they are so scattered around the city that journalists easily found several pieces, highlighting the mysterious finds for local television.

At first it was assumed that the hair may be artificial, but some brave souls who did not disdain to touch it, unanimously concluded that they are natural.

Someone thinks that perhaps the hair was intended for charitable donations (for example, for making wigs for cancer patients), but lost during transportation.

According to another theory, we are talking about someone’s unusual prank. But where the alleged pranker took so much hair, even horse, no one is able to explain.

There is another assumption: it is some kind of religious rite or even witchcraft. It is the latter that is increasingly worrying the residents of Santa Barbara…