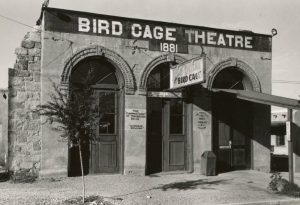 The Birdcage Theatre is one of the oldest original buildings left in Tombstone and one of the most authentic attractions in this once booming mining camp. the Bird Cage Theatre also has the reputation as being the most haunted place in town, with between 26 and 31 ghosts allegedly being present there.

Since 1934, the old building has served as a museum owned and operated by the Hunley family. It still houses the gilded “cages,” hand painted stage, and the original Grand Piano, and people can walk along the floors of this historic honky-tonk, once walked the likes of Wyatt Earp and Doc Holliday.

The Bird Cage Theatre opened on December 26, 1881, and was owned by Lottie and William “Billy” Hutchinson, and for the next eight years would never close, operating 24 hours a day, 7 days a week, 365 days a year. Also called the Bird Cage Opera House Saloon, the establishment featured a saloon, gambling parlour, theatre, and a brothel. In no time, the “theatre” gained a reputation as one of the wildest places in Tombstone, so bad that the few self-respecting women in town refused to even walk near the place.

The New York Times reported in 1882, that “the Bird Cage Theatre is the wildest, wickedest night spot between Basin Street and the Barbary Coast.” During the years that the theatre was open the wicked little place witnessed a number of gun and knife fights that took some 26 lives, and left 140 bullet holes in the ceilings, walls, and floors, many of which can still be seen today.

The theatre was called the “Bird Cage” because of its 14 crib style compartments suspended from the ceiling. Here, the painted ladies would pull the drapes and “entertain” their customers at some of the most exorbitant prices ever heard of in the Old West.

One prostitute would also succumb to one of the hazards of the business there – being murdered. When “Margarita” was sitting on the lap of a gambler named Billy Milgreen, a fellow prostitute who went by the name of “Gold Dollar”, walked in on them. Seeing Margarita on the lap of her best customer and “boyfriend,” Gold Dollar stuck a double edge knife into her chest, intending to cut her heart out.

Having almost completed the task, she was interrupted by the sounds of the marshal coming and ran out the back door. Covered in blood, she hid the knife somewhere out back, and because the murder weapon couldn’t be found, no murder charges were filed. Amazingly, more than a century later, the knife was found behind the Bird Cage Theatre and is now displayed at the museum.

Among the people who once used to visit the Birdcage Theatre were the likes of Wyatt Earp and his brothers, Bat Masterson, and members of the Cowboy faction including Johnny Ringo, the Cantons and the McLaury’s… as well as Doc Holliday, who dealt faro in the gambling parlour. On one occasion, while Doc was dealing, one of his hated rivals, Johnny Ringo, passed by the table. Doc then murmured, “Care to buck the tiger, Johnny? It’s the gustiest game in town.”

Upon hearing this, a drunken Ringo wheeled around, removed his bandana and said to Holliday, “Care to grab to the other end of this bandana? This is the deadliest game in town.” In those days when two men grabbed the opposite ends of a bandanna, they would then fire at each other at point-blank range, generally with both men winding up dead. Undaunted, Doc simply stood smiling, ready to accept the challenge, but ready to use knives, rather than guns. Curly Bill Brocius then interceded, grabbing Ringo and yelling, “Hell, Doc, he’s drunk!” Doc, who had also been drinking, like usual, answered, “Brocius, I drink more by 10:00 a.m. than he can all day.” Doc then turned and walked away.

One of its most famous distinctions was one of the longest running games of poker ever played. Seating seven players plus a dealer, the minimum buy-in was $1,000.00 and was played around the clock for, 8 years 5 months and three days.

Sitting at this table were some of the countries most famous businessmen, such as Adolph Busch and George Randolph Hearst, as well as history’s famous poker players, including Diamond Jim Brady and Bat Masterson. During that eight year period, more than ten million dollars changed hands, with the house, of course, taking its 10%. It was also here, that Wyatt Earp carried on his affair with Josephine Sarah Marcus, who ‘”worked” at the Bird Cage, allegedly as a singer and dancer, though others suspect a “sideline” as “painted lady.”

In 1889, the Bird Cage closed its doors as a brothel and a saloon forever, left with all of its original contents. For the next three decades it would sit languishing in the desert sun. Amazingly, during this time, its bar, furnishings, fixtures, and drapes were not sold. In 1934, the Hunley family reopened the Bird Cage Theatre as a tourist attraction, keeping all of the original fixtures and furnishings in place. Today, the Bird Cage Theatre stands as a museum, still run by the Hunley family, and providing a dusty and accurate picture of the 19th century.

The hand painted stage, which once featured the likes of Eddy Foy, Lotta Crabtree, Lillie Langtry, Lola Montez, and Lillian Russell still stands, along with the orchestra pit and its massive Grand Piano. The gambling parlor continues to feature the actual table where Doc Holliday once dealt faro, and lining the walls are photographs of the many who passed through its doors, as well as original paintings that hung in the establishment.

The original bar still stands and on display is Tombstone’s famous horse-drawn hearse called the Black Moriah. The first “vehicle” to ever have curved glass, it is trimmed out with gold and reportedly worth nearly two million dollars. Ruffled-up beds and scattered clothes are authentic, as well as the original faded carpets, drapes, and furniture.

Seemingly however, some of these old legends of the past continue to visit the old saloon as both staff and guests, alike, have reported seeing ghostly apparitions in 1800’s clothing. Most often sighted, is the figure of a male stage hand that appears wearing black striped pants, a visor, and holding a clipboard, as he walks across the stage.

Other occurrences include the sounds of raucous laughter and music pouring from the doors of the old theatre at night, whilst others report hearing the faint sounds of a woman singing and the museum’s sound system being inexplicably turned on of its own accord, blaring old time music. People have also reported strange sounds coming from the balconies of the main floor and the sharp scents of cigar smoke and whiskey.

After closing time, staff have reported hearing the sounds of clinking glass and cards shuffling. The reports of hauntings at the Birdcage Theatre date back to 1921 when a school was built across the street and students began to report the sounds of laughter and music coming from the abandoned building, as well as the smell of cigar smoke. Over the years, since purchasing the Birdcage Theatre in 1934, the Hunley family, staff, and visitors alike have experienced a number of strange occurrences.

One of the most fascinating tales is of how a dice table, which weighed several hundred pounds mysteriously moved the night before. When staff arrived the next morning, they table had been moved in front of a door with a sign that read. “Don’t Disturb Our 26 Resident Ghosts.” The table is so heavy that it reportedly took eight men to move it back to its former position. Another story tells of a statue of Wyatt Earp that was made and placed in one of the cribs overlooking the theatre.

When it was first placed there, staff would arrive in the morning to find “Wyatt’s” hat continually knocked off and thrown into the floor below. This occurred over and over for about six months. On one occasion, staff arrived to find the statue was turned around, with its back facing the view from below.

Some time later, a local historian told the Hunleys that they had placed the Wyatt Earp statue in the crib that was usually reserved by the Clantons. When the statue was moved to the crib that Wyatt actually frequented when he was alive, the hat tossing finally stopped.

On another occasion, a valuable antique poker chip, which had been missing for years, suddenly reappeared on the poker table. Upon finding it there, it was locked away in a safe until it could be authenticated by historians. However, when the historians arrived, they were disappointed to find that the chip had suddenly gone missing again…only after they left, did it reappear in a locked desk drawer.

The Bird Cage Theatre has been the location of a number of paranormal investigations featured on popular television shows such Ghost Hunters in 2006, Ghost Adventures in 2009 and 2015, Ghost Lab in 2009, and Fact or Faked: Paranormal Files in 2011.