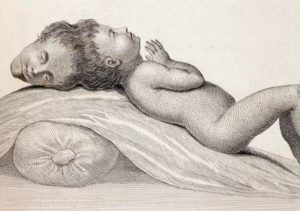 The Two-Headed Boy of Bengal was born in the village of Mundul Gait in Bengal in May of 1783 into a poor farming family. The newborn boys life was very nearly extinguished immediately after his delivery as a terrified midwife tried to destroy the infant by throwing him into a fire.

Miraculously, despite being badly burned on his face and upper head, he managed to survive. His parents began to exhibit him in Calcutta, where he attracted a great deal of attention and earned the family a fair amount of money. While the large crowds gathered to see the Two-Headed Boy his parents took to covering the lad with a sheet and often kept him hidden, sometimes for hours at a time and often in darkness. As his fame spread across India, so did the calibre of his observers.

Several noblemen, civil servants and city officials arranged to showcase the boy in their own homes for both private gatherings and grand galas, treating their guests to up close examinations. One of these observers was a Colonel Pierce who described the encounter to the President of the Royal Society, Sir Joseph Banks and it was Sir Banks who later forwarded the account to the surgeon Everard Home.

The title ‘Two-Headed’ boy, may be a bit misleading as rather that two heads side by side, the boy actually had head one head on top of the other. When compared to the average child, both heads were of an appropriate size and development. The second head sat atop the main head inverted and simply ended in a neck-like stump. The second head seemed to, at times, function independently from the main head. When the boy cried or smiled the features of the second head did not always match.

Yet, when the main head was fed, the second head would produce saliva.

While the main head was well formed the secondary head did posses some irregularities.The eyes and ears were underdeveloped, the tongue was small and the jaw malformed but both were capable of motion. When the Boy slept, the secondary head would often be observed alert and awake, eyes darting about.

Despite the attention the Boy of Bengal received, none of it was from the world of medicine, and the boy who seemed to suffer no serious ill effects in relation to his condition, died at the age of four from a cobra bite.

It was only then, after the boys unfortunate early death, that medical world was able to examine the case.

The boy was buried near the Boopnorain River, outside the city of Tumloch but the grave was soon robbed by Mr. Dent, a salt agent for the East India Company. He dissected the putrefied body himself and gave the skull to a Captain Buchanan of the East Indian Company. Buchanan brought the skull to England, where it ended up in the hands of his close friend, Everard Home.

When Mr. Dent had dissected the heads he discovered that the brains were separate and distinct. Each brain was also enveloped in its proper coverings and it appeared as though both brains received the nutrition required to sustain life and thought. The skull of the Boy of Bengal can still be seen at the Hunterian Museum of the Royal College of Surgeons of London.

The condition is today known as Craniopagus parasiticus and technically falls under the category of parasitic twins however many of the early naturalists have attempted to classify the Bengal case as a case of conjoined twins due to the signs of independent life given by the second head. Fewer than a dozen cases of this type of conjoined twin have been documented, and most infants with this condition are stillborn, or die shortly after birth.