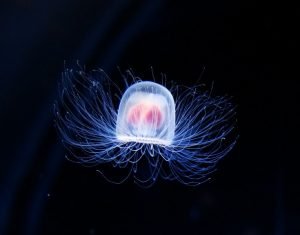 The life cycle of any terrestrial organism ends with death. But not Turritopsis nutricula, a unique creature that can live forever, reports www.airzen.fr.

In the depths of the tropical sea, American scientists have discovered a new species of jellyfish – Turritopsis nutricula.

In size, it is significantly inferior to its counterparts and differs from them in a unique feature – a jellyfish is capable of endless self-regeneration.

When the body cells of a jellyfish age, the creature does not die. Sinking to the bottom, the jellyfish is covered with a chitinous layer and spends the rest of its vital forces on self-healing.

Renewed, she emerges from the chitinous shell and lives another life cycle. And then another, and so on endlessly.

If scientists manage to figure out how Turritopsis nutricula manages to control its genes, then this could be a real breakthrough in medicine. After all, the main dream of man for centuries has been the desire to live forever.

Creepy tower made of human skulls discovered in Mexico