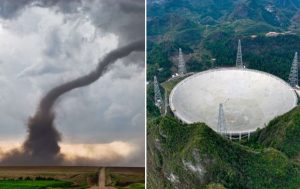 The famous Taiwanese researcher Scott Waring, on the pages of his blog, suggested the cause of the catastrophic tornadoes that occurred in the United States. He believes that the cataclysm could have been caused by the Chinese military from their territory.

Waring draws attention to the latest developments in the preparations for the upcoming Olympic Games in China. The fact is that the United States decided to boycott this event, and the Celestial Empire, in response, promised to answer the United States for its disrespectful attitude towards the country.

The conspiracy theorist believes that the tornadoes that hit the United States are the work of the Chinese military, who allegedly used the world’s largest radio telescope as a climate weapon.

Thirty tornadoes that suddenly hit the United States overnight have killed about 100 people. Shortly before these events, the world heard about how China is manipulating the weather to make it rain and clear the air in an area the size of Alaska.

In 2020, the PRC authorities announced the development of a weather management system. With its help, it was planned to eliminate the consequences of natural disasters, wildfires, as well as to more effectively deal with droughts and extreme high temperatures.

In January 2020, the world’s largest radio telescope with a 500-meter aperture began operating in Guizhou Province (China). Waring believes this telescope could be a real instrument capable of creating tornadoes.

The researcher refers to the famous American program HAARP in Alaska, which was aimed at researching and managing the weather. Waring believes China may have stolen the schematics and research results to create its own HAARP.

Waring believes that an important point is that tornadoes do not appear all at once in the amount of 30 pieces. Especially at night when the temperature is below zero. Tornadoes usually come in the summer months, as many meteorologists know about, the researcher emphasizes.

Some brain cells remain active after a person’s death