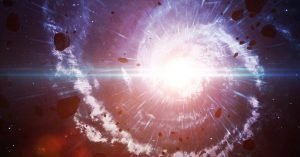 The big-bang theory was first proposed by Georges Lemaître in 1927 sans its contemporary name, which was coined in the 1950s.

The common name has allowed for the beginnings of our universe to be too often depicted as a massive explosion similar to that of an epic supernova. But was our universe really formed in a cosmic fireworks show? Or was something else at work?

The “big bang” wasn’t a “bang” at all, at least not in the common definition. It didn’t explode in a scene of shrapnel and fire, and there was definitely no mushroom cloud.

The big-bang theory of the universe is derived from Albert Einstein’s general theory of relativity and the idea that the universe expanded from a miniscule dense collection of energy called a singularity. There was no bang, just a vast expansion of extremely condensed material.

So why describe the theory with such a misleading name? To mock it, perhaps. Sir Fred Hoyle snidely referred to the theory as the “big bang” with the intention of reducing it to absurdity, and it stuck.

Hoyle believed, contrary to the big-bang theory, that the universe itself did not have a beginning, rather the components inside it did. This is called the steady-state theory, which has decreased in popularity in light of the common acceptance of the big-bang theory.

If the universe didn’t explode into existence, where did it all come from? According to the theory, the universe—this includes all space, time, energy, etc.—was condensed into an extremely hot zero-volume entity of infinite density called a singularity.

In physics density is quantified by dividing mass by volume, meaning that the equation to determine the density of a singularity divides by zero. If that doesn’t hurt your brain, this will: Because all of space and time existed within the singularity, the singularity itself did not exist within space or time.

It cannot be represented and described mathematically, because the laws of physics that we know do not apply in the singularity.

The universe as we know it (or barely know it) is the result of this singularity expanding and cooling. Since the singularity itself was not in a location on the planes of space or time, there is no center of the universe; everything is expanding from everything else at an equal rate.

As for the origins of the singularity, or even what existed before it, scientists are just as befuddled as everyone else.

Is It Possible To Send Astronauts To Venus In The Future?

How Can We Be So Sure That Mysterious Dark Matter Exists?