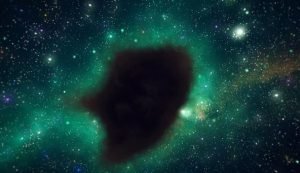 Supernovae and black holes, although they surprise scientists, are gradually being studied and recorded. Scientists are much more concerned with strange places in the Universe, which are difficult to explain by the laws of physics and nature we know. The Bootes Void is one such place. It is not considered to be emptiness by chance – there is absolutely nothing in it.

Astronomers for a long time could not believe their own eyes, because in a colossal area of ​​300 million light years there was not a single galaxy or star. Solid blackness extends over unimaginable distances.

According to astronomer Greg Aldering, the scale of the void is such that “If the Milky Way had been in the centre of the Boötes void, we wouldn’t have known there were other galaxies until the 1960s.”

Scientists began to count the density of galaxies and came to the conclusion that there should be about 10 thousand of them in the place of emptiness.

Our galaxy, the Milky Way, already has 24 neighboring galaxies at a distance of 3 million years – roughly the same density is observed in the rest of space. Except for the Bootes Void.

Technically, there simply cannot be such a place in space. One gets the feeling that someone has taken and carved out an entire galactic cluster.

Scientists have yet to find out where the galaxies and stars have disappeared. All theories existing at the moment are too fantastic.