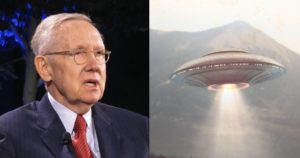 Reid said in the documentary “The Phenomenon” released Tuesday, repeating claims told to him, “If they had been called upon by the president to launch [the nukes] they couldn’t have done it.”

Reid, who was a leading figure in the founding of the classified UFO program of the Department of Defense, said multiple UFO sightings by nuclear launch officers have happened.

In the documentary, he did not expand on any further information supporting his claims, but said that “most” UFO research “has not seen the light of day.”

“Nobody has to agree why it’s there, but shouldn’t we at least be spending some money to study this phenomenon?” he said in the documentary.

“Shouldn’t we study the stuff? The answer’s yes. And that’s all this was about. And why the federal government all these years has covered up, put brake pads on everything, stopped it. I think it’s very, very bad for our country.”

Reports of UFOs interfering with U.S. military operations aren’t new. In fact, Congress has pressured the Pentagon for answers on reports of UFOs flying through military airspace.

The Pentagon formed the Unidentified Aerial Phenomena Task Force in August in an effort to improve its identification and insight into UFOs, as well as their potential threat to national security.